To the beaver ponds.

My initial focus this morning was what I could see. Facing south because I like to sleep on my right side, my view was open as that was the direction I had set my Tyvek shelter the previous night. In those first moments of consciousness I couldn’t help notice the clouds; The dark clouds; While coming into focus they appeared to be coming our way up the basin. “Rohr Oh” were the only words I could mutter and I jumped out of my sleeping bag with definite purpose. If a storm was coming, then I needed to re-orient my shelter away from the wind. I quickly stiffed my bag, and rolled up my sleeping pad. I decided to take another look. Maybe the clouds weren’t heading right for us. Maybe they were moving right to left across my field of view. Maybe I jumped to the wrong initial conclusion.

HDR shot in the early morning. Though ominous looking they looked worse when I first awoke. 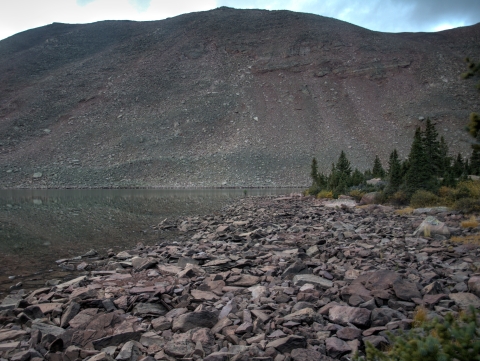 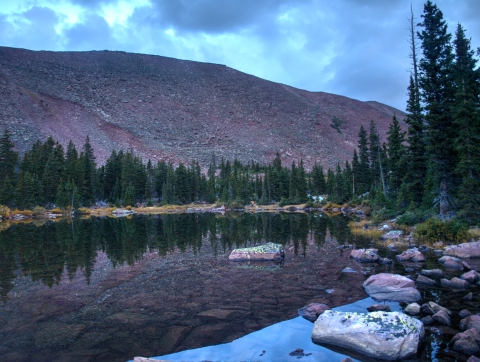 Looking back towards camp

I was up, so I grabbed my camera to see what I could do before everyone else awoke. I bought my E-410 off an e-bay sale 1 week before I entered the grand canyon. Then, I only understood basic operations, though I carried the User’s Manual as a PDF on my phone. The one thing that still perplexes me is the auto-focus. At times it just cannot decide what to focus on, and to further perplex me, at times it fixes in an out-of-focus state for a long time ‘thinking’. About what I do not know, but it will not apparently start focusing again until I change its field of view. It’s like it says “I give up, try something else!”. I am very frustrated about that. I was experiencing those frustrations this morning. The clouds were dramatic, the water was still, the mountains were bold, the light was warm. Great opportunities. I must have deleted 30 failures! Larry came down to fish X-24, and that gave me some more opportunities to explore.

Camp is cleaned up and we are on our way out.

The original plan had been to spend two days up in Swift Creek Basin with a day hike or fishing on the table. Maybe hike over to the Timothy lakes to fish. However, with all our extra unused fuel, and a few other purchased items to return, we felt that maybe we should move our last nights camp closer to the trail head. Then we could get an easy start to our last day, be out by 11, packed by noon, grab a greasy spoon diner meal, and get back to SLC before REI closed. Most of the hike would be downhill, so what wasn’t to like in this new plan? Nothing, as it turned out. 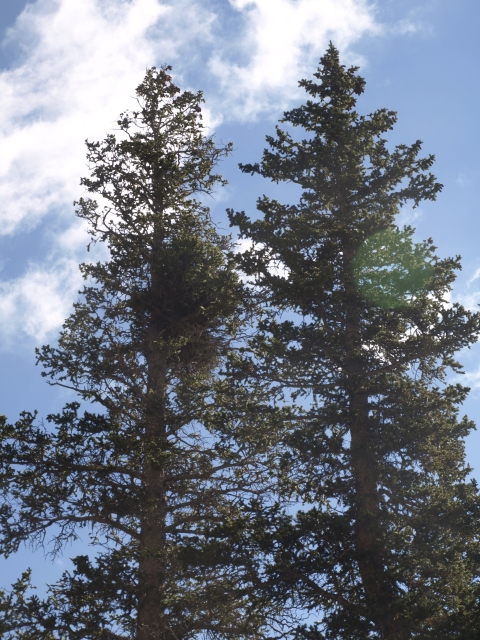 A look back at the huge predator Gossamer Hawks nest.

At this point in our journey we had eaten a lot of weight, we had consumed many beer concentrates and we only went through two canisters of fuel. Our packs were getting lighter. We didn’t over carry water, as no one carried more than 1.5L, so downhill wasn’t terribly bad at any point. The only complaint is that there is so much downhill, that it does wear on you. Different muscles at work than what we had been used to. In addition there is a certain pounding that your body takes as most of your weight comes crashing down on the heel of your foot as each one is planted to receive that weight. So it does exact a toll. 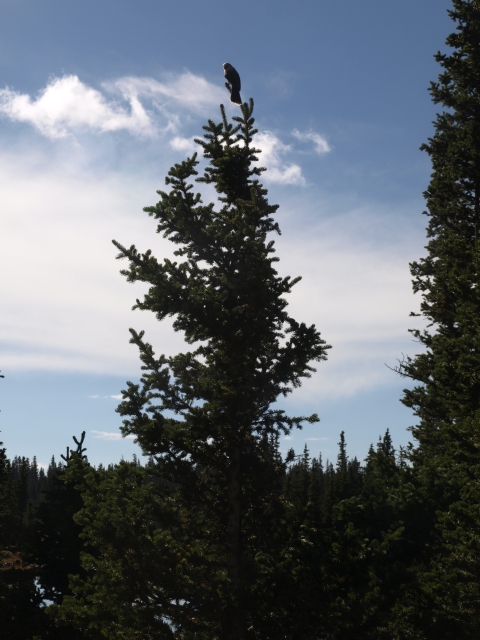 This little one was there to see us off.

Our first intermediate destination was the junction where we would turn off H-55 and onto the trailhead trail. This was just below Farmers Lake (Hmmm I wonder where that name came from), and was only about a mile, mile point five down the trail from our camp. Some of our last wide open meadow experiences would be along this short section of the trail and I captured them with some decent panorama shots.

Back on the trail.

We dropped our packs, and set off up to Farmers for a look. An eighth of a mile tops, and we were rewarded with a grand view. The largest lake we had stood on the shores of, it was tranquil, still, and completely ours at that moment. A few breeze ripples on the far side, but otherwise, a mirror of the surrounding mountains and skies. Larry grabbed his best shot on these shores, and some of my pictures aren’t too shabby either. We retrieved some fishing related detritus, snapped some more images, and returned to our packs before any opportunistic little rodents got any bad ideas.

Looking back at X-24

From here the trail dropped steadily all the way to Deer Lake. Deer was my original non-original location for our last camp, but it is on the restricted list for camping, so we decided to move still closer to the trailhead. We had two crossings of Swift Creek to make, and either one would offer some potential flat ground camping opportunities. The intersection with Deer Lake occurred right at its mouth, with an easy creek crossing. It piqued our imagination a little and we staged an Abbey Road style picture though with clouds developing, there wasn’t enough time to stage a full group shot with the tripod, so I am not in that picture. Utilize your imagination and picture me there.

Difficult to not take a pan shot when it is so wide open.

Lilly pond on the way down.

I can’t recall which Lake this is

back into the woods

Aspens. It is a name, like chocolate, that can simply stand on its own. You say “Aspens” and it is always the fall color images that immediately come to your mind. They appear to be on fire they are so bright. The Swift Creek Trail runs right through them, and this was the first time on this journey that we were right in amongst them. Aspens also mean something else. Beavers. They love Aspens. Tasty nourishment, and just the right tree to build dams out of. So as we approached our first Swift Creek crossing, the Beaver dams began to pop up. Not one, or two but many. It almost resembles terrace farming you see in oriental images where farmers carved out flat terraces for their rice paddies, except it is Beavers, and each little pond harbors silt and nutrients sustaining life for the fishes. A remarkable scene. 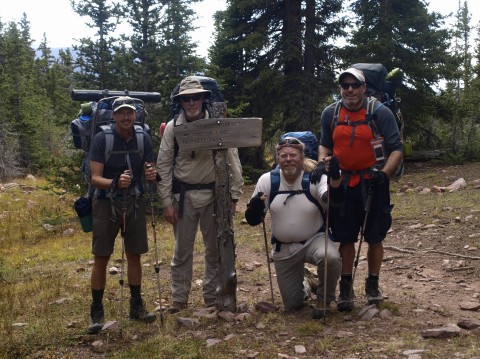 Farmers Lake. All to ourselves.

After the first crossing Larry and I started scoping out areas to camp. We were now on the East side of Swift Creek moving along a narrow strip of land between the creek and numerous talus slopes. There were some locations that would do in a pinch, but they contained no fire ring, and the creek accessibility was limited. We found one spot that seemed like it would work, but Larry and I felt like we should keep looking. The others remained, and we went ahead with our packs. I didn’t really want to have to come back for my pack if we found a better site, and having my pack and the incentive of not carrying it back uphill, would keep me focused on finding a better spot. After we had gone a mile there was a little skepticism amongst us, but neither of us wanted to climb back up the trail, so we pushed on until we came to the second crossing. Beaver ponds galore, and with fish spotted as well. I dropped my pack, crossed to the other side, found a fire ring and 4 tent sites right along the creek. Bingo!! Job Done.

The Aspens are coming.

Have to love the Aspen when it is in its fall colors.

I left Larry to claim the site (No one observed his footfall into the creek), and I high tailed back up the trail (sans pack) to retrieve our compatriots. Found them right where I had left them, and I coaxed them into re-hoisting their packs for the last mile of the day. 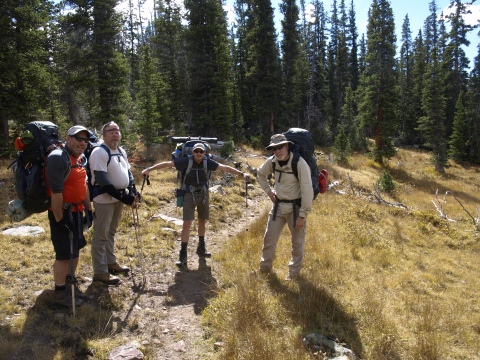 Our adventure is winding down and I had them pose for a shitload of pictures.

A lot of rocks on flat ground. Where did these come from?

We all made it down to the crossing, stayed on the trail, and crossed to campsite heaven. It was tight, but we all found locations, and quickly set about erecting our various structures. Larry and Greg had been sharing a tent all this time, while Andy and Walt had each hauled a personal tent. Walt’s was truly a single person tent, while Andy’s could have accommodated another. Personally I preferred being on my own under my tarp. It was proving to be a decent low cost shelter, though it was showing signs of wear. I need to reinforce the grommet holes.

Larry was fishing already as I had tasked him with catching fish when I left to get the others, however the pond fish were below the legal limit for keeping. We were all ready to join in when the rain came. It was never very bad, and it cycled on and off with periods of hail. Walt and Larry continued to fish while Andy Greg and I huddled under my tarp. Larry came back and instructed Andy to assemble his spinner and me to get my fly rod set up. We were going to catch some damn fish on this trip!

Crossing the outlet of Deer Lake. 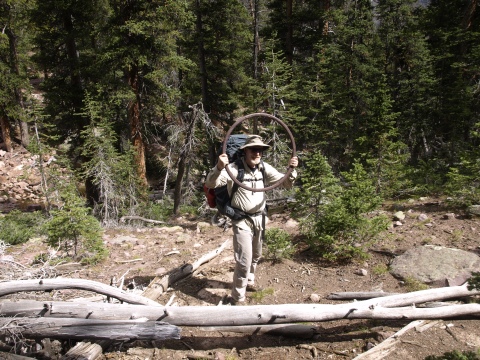 Greg found what might be the outer frame of an old wheel?

It was this instructional period that led to the pilot creation of the 10 part “With Andy” series, episode 1 being “Fishing with Andy”. Walt and Greg were Steri-penning water and had what could basically be called “front row seats” to the instructional entertainment that was Andy’s first catch native cut-throat trout. Episode screenplay coming soon. 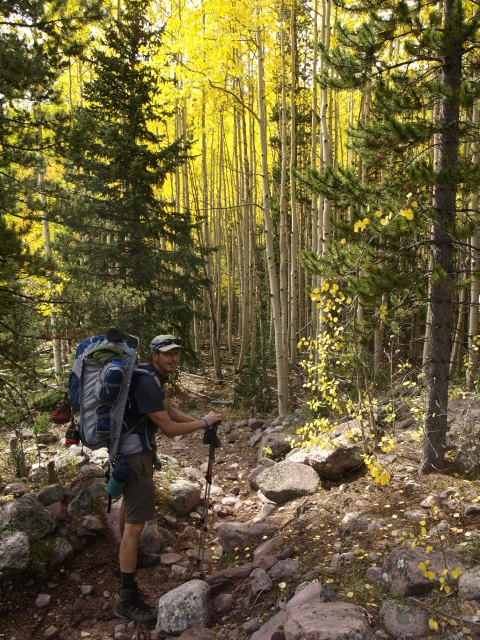 The Aspen is on fire!!

Where there are Aspen, there will be Beaver.

Larry gave me a Cadis Fly (Dry), and I went down and fished the lower pond where I too landed a massive 4″ little guy. It was a fish though, and from there I caught a few larger, but still not legal to keep, throw backs. At least they were biting, so that was fun.

And where there are Beaver and Beaver Ponds? Native Cut-Throat Trout.

Our last night out in the wilderness and we all tried hard to make it last. We didn’t consume any more beer concentrate than we did on any other night, nor smoke any more hand rolled cigarettes than any other night, but we did all try to stay up until we just really had to turn in. No rain, just stars, and I think we were all a little bit uneasy about the location of our camp site. Beavers are nocturnal workers, and our camp site was right on what is called a “Beaver Chute” where the beavers like to haul the branches chewed from the trees they take down higher up on the hillside. It seemed like a real threat, but perhaps it was our smell, and/or our fire that kept the beavers focused elsewhere that night. No beaver disturbances befell us. Hell, I didn’t even have to get up to pee. Yippee.