State College Instead of Mallorca?

It’s not the Mediterranean; There aren’t gorgeous ocean views, or even gorgeous ocean villas! However, in my mind at least, some of the best riding I have ever done was in and around State College, Pa during my tenure at Penn State.

The Penn State experience stretches to many, far and wide. Locally here in Monmouth County, NJ I am often riding with my friends when we happen upon Penn Staters who are collecting for Thon, and I always give them a rousing “WE ARE” cheer when I pass them, and the alert ones fire back “PENN STATE!”.

As it turns out one of my early morning cycling friends, Mike Borneo has two daughters currently in attendance, and though I haven’t been back to State College myself in a long while, talking to him re-kindled a long dormant desire to return and cycle many of the old routes I used to ride with my college friends at the time. In the age of Google Maps, it is easy to see that there are more opportunities for routes, than I knew about in my day, so in that sense, riding new routes looks like a ticket to have punched as well.

Though I often say that I am not interested in cycling trips, I guess that isn’t exactly true. I did help to organize the “Bring Cliff Home” ride last year, and I have been following Seth Davidson’s blog for a few years, and his travels take him to “Cycling Disneyland” in Mallorca. I have dropped the google maps street view avatar all over Mallorca, and it does look like an excellent place to spend some cycling time.

The problem is that it is so far away. The amount of travel time exceeds what most people will deem acceptable, and State College is close enough to drive to in 4 hours. Easy enough to bring most everything you need, and if you book in advance, and avoid Football weekends, you can get a nice place for a reasonable price.

I have plotted out the following rides.

Go East & Come Back – One hundred and five miles with 5300′ of elevation gain, takes us East out into the valleys that connect State College and Lewisburg, though we aren’t going to Lewisburg. Amish country abounds, and reasonably quiet roads roll by beneath the wheels. Though I have been out into these valleys many times, this version of the route takes us over the northern ride and back before using Bald Eagle State Forest to cut back down to Route 45 and the ride home on Route 45. 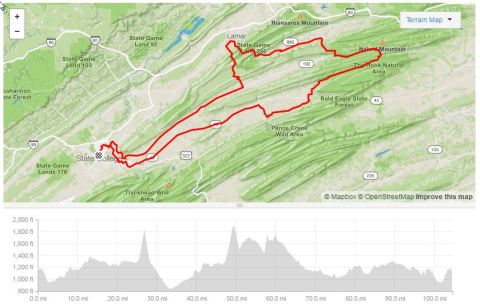 Stone and Happy Valleys –  At Eighty Seven miles this ride takes in 6200′ of elevation gain and confines itself to roads that I have traveled the most. It begins with an ascent of Tussey Mountain, a climb I usually did 2 or even 3 times a week, maybe more. Usually I turned back at the top and only did around 40 miles most times, however with a group, we would descend into Stone Valley, and work our way South to get around the ridge, and then return in Happy Valley. This version takes the ride to the far West side of Happy Valley and continues to Bellefonte before returning home.

Lock Haven or Bust – At nearly One Hundred miles, and over 7000′ of elevation, Lock Haven provides a great destination as a mid point in a century ride. Lock Haven lies along the Western Branch of the Susquehana River and is home to another Pennsylvania University, and used to have a Piper manufacturing plant until Hurricane Agnes flooded the plant, causing losses that eventually drove the company to move to Florida (A hurricane safe location) This route returns along the edge of the Allegheny Plateau and climbs back into Happy Valley on a road I had no idea existed until I started exploring the area with Google Maps. 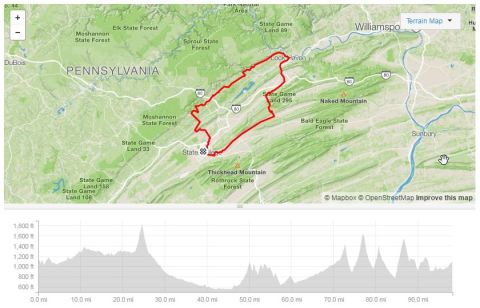 Black Moshanon – Another century+ and this time 8500′ of elevation can be found on this route which travels West into the heart of the Allegheny Plateau and Black Moshanon State Park. This ride touches on some roads I am familiar with, but this ride overall is new to me.

Queen Stage – One hundred fifteen and 8000+’ of elevation make this a big day on the bike, but it covers some beautiful terrain, and is worth the distance. This route connects two routes that I am familiar with, but never in the same ride. I suspect that food and beer will be needed at the end of this long day. 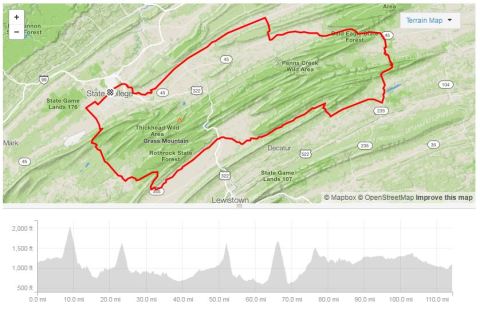 On and Off Road Roads – The final route includes forest roads, so bring your 25’s and be ready to be nowhere. To the Southeast of State College lies hundreds of miles of Forest Roads. Areas like Thickhead Mountain Wild Area, Rothrock State Forest, and further East you will find more in Poe Valley all the way to Bald Eagle State Forest.  At just under a century, but still pulling in 7K of elevation gain, this route takes us into Thickhead Mountain Wild Area, Rothrock State Forest, and then some back, back roads through Stone Valley and up and over Tussey Ridge. Not finished here though, we navigate down through Arch Spring and through a gap into Tipton where we turn NE and work our way back into Happy Valley via Tyrone and a gap in Laurel Ridge. From there we wind through the heart of Happy Valley through Marengo, and we will take a chance on Scotia Range Road that will bring us back into State College from the West. “Range” is used here as in a “Shooting Range”, but the road is listed as a bike route.

That seems like enough pain and suffering for one trip. What about when we aren’t riding our bikes? What then? It’s not hard to imagine that anyone would have the energy, after any of these rides, to then prepare food for everyone else. That is really a crap shoot, however there are options to consider. Depending on accommodations, paying for large rental with cooking facilities does seem like an economical decision. Potentially we would need someone who wants to cook, or potentially, one person is charged with the main meal each day, so that person doesn’t do the ride. Not sure how I feel about that. I would be fine with exploring hiring someone to come in and have a meal prepared for the crew.

There are many fine places to eat in and around State College, but one has to bear in mind just how wasted everyone will be after the day’s ride. You have to figure each riding day at about 8 hours, and by the time everyone gets cleaned up, and organized to go out, and the time it takes to get served, and pay the bill, it could be quite late before everyone crashes in their pillows for what rest they can scrape together.

This doesn’t even take into account the time needed to prepare for the next days ride including any bicycle maintenance that may need to be performed.

There are a lot of questions about this to which I don’t have answers as of yet. For example, “How would the logistics work on this?” Could N people get away for 1 week in a rented house and function together? What do people desire? A large house that accommodates everyone or get relatively cheap hotel rooms? Hotel Rooms mean you are definitely eating all meals out, or at the very least, breakfast is simple, lunch is on the road, and dinner is an organized outing at a local restaurant.  Be close to town, so options are wide open, or get a nice secluded place outside of town, and re-configure all the start/end points of each daily ride.

What about Spouses? Do we get a larger place and invite double the people? How would that work? It could work. If we went that route, I would definitely hire someone to cook.

When? State College is best from late May through end of September. There are 3 expensive times to go. Football weekends, Arts festival weekend, and Blue-White weekend. All other times should be cheaper. I feel like warm weather is best, so I am inclined to target a late July outing.

Nothing is planned except possible routes. All I need to know is who is interested. And when I say “who” I am cognizant of the fact that I wrote a public blog to advertise my thoughts, but the “who” will be limited to those I know. Sorry in advance.

Give it some thought. Nothing is planned other than the routes. All it takes is enough interested parties to get an actual plan in place.

§ 2 Responses to State College Instead of Mallorca?

You are currently reading State College Instead of Mallorca? at Big Bird's Adventures.