Their site lays out the cycling week schedule, should you be interested. Going into this adventure I initially thought I would join them for Monday and Tuesday, and then I would meet my friend Fritz on Wednesday morning before we headed out into Sonoma for the second stage of our vacation. Not sure what happened next, but the SFCC site said that Monday’s ride leaves from Baker and Fell at 0615. I quickly located that corner, and it wasn’t terribly far from the hotel we had rented.

I went to Strava activity search and looked in that general area for people’s rides that started at that corner, and soon enough I found the Monday ride. Curious enough I found an entry for a Tuesday ride that left from there as well, but the leave time was 0600 and not the 0615 listed, and that confused me. More on that in another post.

We booked into Marriott on Post Ave. and there was a bike rental two blocks away where I secured the steed that would take me around the Peninsula. We arrived Sunday, and thanks to D2 and her boyfriend, we were at our hotel by 4PM Sunday. Plenty of time to settle in and walk over to get my bike.

I had been thinking about, and planning this for weeks, and so when the time came, of course, my adrenaline was stoked, and I just knew I wouldn’t sleep well. An 0615 start, means I had to get up 0530, and keeping my “light” exposure to nil, I needed to take care of some business before I sought egress from the room. Using my iPhone flashlight I gathered up the things I had set aside the previous evening, and with all in hand, I opened the cell door as quietly as I could, but you all know how hotel room doors close. Snow White couldn’t sleep through that!

I pedaled East on Post to the first right (Jones) and then South to McAlister where a right turn took my West. I negotiated the funky left in, and then right out of 7th to Leavenworth, and soon I was pedaling along the easy an abandoned McAlister. At most intersections, I was already slowing for the Red Lights, and then blowing through on clear, however at Van Ness (Hgwy 101) I had to put a foot down and wait. Just too much traffic to chance it.

McAlister took my all the way into the next hill that started around Pierce St, and continued all the way to my left on Scott. That turned out to actually require me to finish the damn climb before descending to Fell. Fell. What a fuggin nightmare. Even at 6am that street is a mess. Why does everyone want Fell? Anyway, I had the light, and the bike lane was on the left side of Fell, which I fell (ha!) into and rode to the corner of Baker. Baker and Fell had a park on the SW corner, so Clearly, that was the ride corner.

It was 6am. I was 15 minutes early. Oh Joy. If the recipe for earliness is outsiders, then shortly afterwards a gentleman rolled up. Happy to have company I initiated conversation beyond the initial “Hello”. “Are you a regular to this ride?” I asked. “No, I just flew in this weekend from Norway”. And that is how I met Ken. Ken’s flight was delayed in London the past weekend, and he arrived into town too late to catch the first ride he wanted. Ken was smarter than I was. He found a shop that actually delivered his bike to his damn hotel room! Notes I took.

As both being newcomers, we chatted while we awaited the regulars, who did roll in over the course of the next 10 minutes. I won’t list all the characters, but the ride leader, “Ray” showed up and when all, or enough, were present, we set off. As observed on Fell, I quickly found that no one wants to ride Fell, and hence, the two lane alternative bike lanes in “The Panhandle” park were the route of choice to get to the entrance to Golden Gate Park and JFK Blvd. I am not entirely sure where all the Fell traffic went, but when it got to the Park, it didn’t pursue JFK Blvd, as we had the road to ourselves. As an outsider, I placed myself somewhere in the back, and simply followed wheels. We rolled through 4-way stops as they were clear, and we yielded as necessary when they were not. JFK empties onto MLK, which then dumps us onto The Great Highway.

It was still dark, and though there is an actual alternative bike lane, the safest lane for the bikes was to take the right lane on the Great Highway. Bike paths have pedestrians, and in my experience, they are way more unpredictable than cagers on the road. So we held our lane, and proceeded South.

Recovery. Monday is a short ride, and with racing still being a real entity in both SoCal and NorCal, some people who show up to this ride are simply stretching their legs, and want an easy day. However, there is always someone who shows, who missed the weekend races, and wants to do more than stretch their legs. I asked someone what kind of ride it was, and was told “Recovery”. On the great highway, we found ourselves single paceline, in the drops doing way more than simple tempo. Ben was on the front, and apparently still had some unshaken cobwebs that he hadn’t liberated this past weekend.

No one that I saw attempted to take over point, and Ben drove us all the way to Sloat Blvd where we caught the Red. “I am not sure that ‘recovery’ means the same thing in California that it means in NJ” I mentioned to my nearest fellow rider who had told me it was a “recovery” ride. That got people talking, and soon it was apparent that the loop around Merced Lake would comprise the non-recovery riders, followed by the recovery riders. Once around, we would re-group, and the ride would stay together until people pulled off for their own residences.

Being an outsider, and it still being dark, I never noticed that we completely circumnavigated the lake, and re-crossed our path. I was completely backwards when we stopped for coffee at a place on 43rd and Lawton, The Andytown Coffee Roasters. The line extended out the door, but we lined up and patienced our patience, and I grabbed a cappuccino with the a cheddar jalepeno muffin that was delicious. We sat outside and I simply absorbed the conversation. There was talk of tomorrows Halloween ride, but at that point I was committed to meeting Fritz Tuesday morning, so I didn’t pay attention to the talk, and I didn’t ask clarifying questions.

After Coffee, we headed back, and at various break off points, a rider went left while the group went straight, or a rider peeled right, or the group went right and a rider went straight. The net result was that by the time we got back to Baker and Fell, it was Ken, myself, and two others who were locals. Ken and I were headed for the same side of town, and so we set off together.

Back at the hotel, I grabbed some more coffee, and I went to Strava to save my ride. Quickly I found many of the folks from the ride, including Ken, and as with all #socmed we all started following each other. Being the outsiders, Ken and I were both iPhone image capturing our experience, and so our posts were jpeg rich. I wished deeply I could ride with these folks again, but plans were made, and I turned my focus to the day ahead. With both D1 in town, but working, and D2, who lives in San Fran, also working, my wife and I were on our own, and I needed to get ready to be more than a lump on a log. 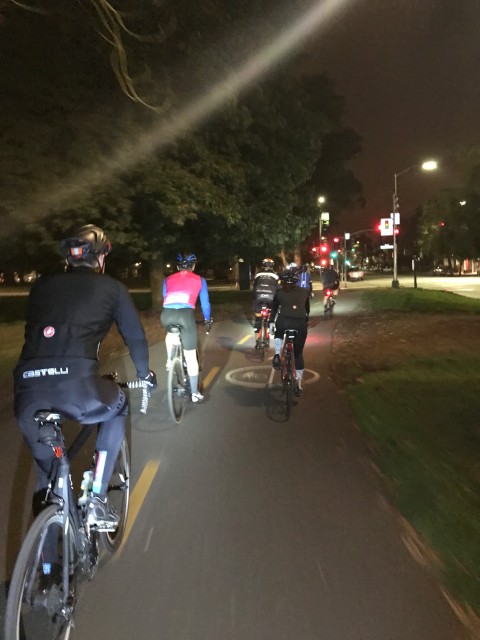 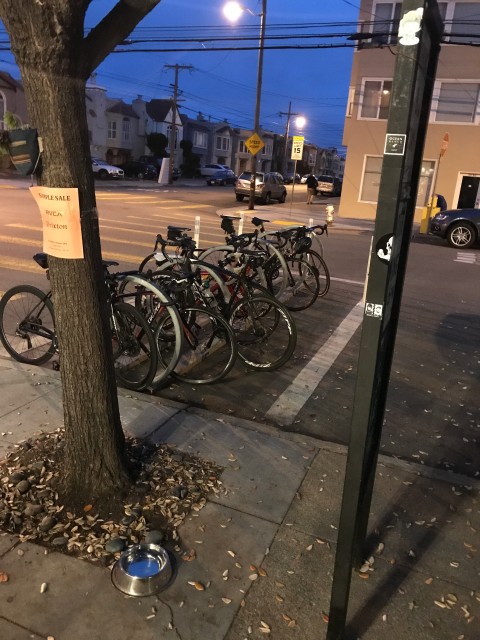 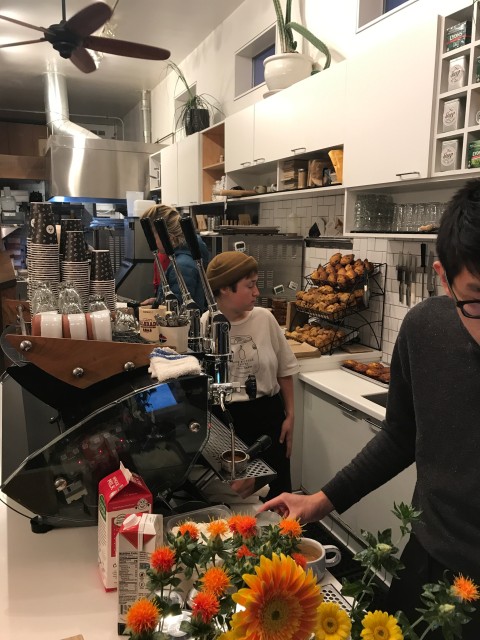 Lots of dynamic range from over the group.

Golden Gate Park, and the people begin to peel off.

You are currently reading Catching The Monday SFCC Train at Big Bird's Adventures.