Pardon Me, Excuse Me, Move it Over Please. Alcatraz

George Carlin’s “Class Clown” was one of my first albums. This wasn’t long after George made the jump from traditional straight-up suit wearing comedian to counter-culture long haired comedian. I played this album so many times, and many of those times with my friend Chris. There is a segment titled “Muhammad Ali” that takes a poke at the cleaned up white washed version of American History. The last portion of this concerns Native Americans and goes like this

We signed up for the All Hallows Eve nighttime tour of Alcatraz. Susan and I had been moving around the city all day while our girls both attended to their work responsibilities, and we all met at Pier 33 where the tour ferry to Alcatraz departs. It seemed like a good idea to go see one of America’s most famous Maximum Security prisons at night. Why not?

We all came together at the pier. Since Susan and I arrived first, I got in line early to secure an interior seat, and Susan waited on the girls. It’s only a 12 minute ferry ride out to the island, but it is cool outside, and the interior seating was worth the effort. The first thing that I recognized when we docked was the “Indians Welcome Here” spray painted above the United States Penitentiary sign. This is a remnant from a period after the prison closed in which a group of people of Native descent began an occupation of the island in 1969. The occupation lasted 19 months and was responsible for a change in policy in which the Richard Nixon rescinded the Indian termination policy, and signed a new self-determination policy which is still in effect today.

The tour begins with a megaphone welcome by a park ranger, followed by a walk up to the penitentiary past all the non-penitentiary support and employee housing units. I think the most interesting thing about the island facilities was that most of the guards lived out on the island with their families. The guided tour tape actually contains interviews with some of those children recalling that time as adults.

Once inside the main building the tour breaks up into a personal guided tour using a set of headphones and a player. This way you can move through the facility at your own pace and linger where you want to linger. I found this to be a very nice way to explore. Listen to a section, pause the playback, and then do some more in depth investigations. The one thing that stands out is the condition of the place. At this point, another 50+ years have passed, and with one of the reasons for closing the place being the maintenance of the place, deteriorating in the moist salt air, that was apparent everywhere you looked. There is an informational description of a process that they are working on to curtail one of the chief causes of decay which was the electrolysis of the steel rebar with the surrounding concrete.

The decay factor added a shroud of death to the place, but enhanced the photographic characteristics immensely. I elected to take nothing but my iPhone with me, as that has been my camera of choice for some time. I won’t lie and say it does just as well as my DSLR, but in some ways I find its capabilities superior. That may be because I need to upgrade my DSLR!

There isn’t much more to say on this subject, except that if you find yourself in San Francisco, I would recommend a trip to Alcatraz, and if it is available, go at night.

Sunset on the Ferry 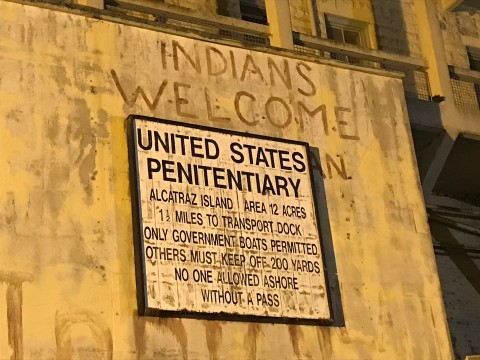 A Typical Cell? Smoking allowed with Bugler’s on the shelf.

The View from Alcatraz

You are currently reading Pardon Me, Excuse Me, Move it Over Please. Alcatraz at Big Bird's Adventures.