Why The Eagle Cap Wilderness

While there may not be thousands, there are certainly hundreds of wilderness opportunities. Let’s not limit ourselves to wilderness, because National Parks, and National Recreation areas are fair game as well, so when it came to following up our previous adventures in Banff two years ago, there were more than a few ideas. Glacier National Park, Yosemite National Park, Kings Canyon, a return to Zion, Le Grande Tetons, Yellowstone, The West Coast Trail, any part of the Pacific Crest Trail. As said, the possibilities are only limited by your imagination.

I cannot remember the exact conversation, nor the details, but I do believe the inputs were this. In the 90’s, long before Mike Smith had a girl friend/wife, he used to come out to play with us during our “weekend warrior” long backpacking weekends. After he married, and when he was living in South Carolina, we picked locations that would allow him to participate. For me, that usually meant a Thursday night component to travel, and the the Friday morning addition, followed by the full mileage to return home late Sunday. Not a problem, as I enjoyed Mike’s company, and why not try new areas.

Fast forward, Mike lives in Corvalis Oregon with his family, and an input into the “Where do we hike next?” equation, was “How do we include Mike?” in this, and that is when Scotty spoke up with “How about the Wallowa Mountains?” “Wallowa Mountains? Where are they?” may have been uttered by every non Oregonian present during the utterance. We came to understand that the Wallowa Mountains were located in Northeast Oregon, and included the Wallowa Whitman National Forest, as well as the Eagle Cap Wilderness.

Google is a great tool, and somehow, I entered query information that led me to a US Forestry Service site where you can download geo-pdf quadrangles for any National Forest. The latest and greatest topographic quadrangles were available, and even better, I could import them into the Avenza app on my iPhone, which offered the ability to layout routes. Furthermore, in the back country, using only GPS, these same maps could tell you where you are. Double score. Of course, the free version of Avenza allowed only for 3 imports, so I subscribed to unlimited imports.

The more the merrier. I am a firm believer, that if 5 people enjoy themselves in the back country, then 10 people can do so as well, and since I have been organizing these adventures, I wanted to include more people. Six is a nice number, but my core group of interested hikers is actually 8 or nine. Throw in a few people who have heard about these trips, and soon you have, what you think is, 10-12 committed people. The idea of this trip was shaping up, and the more I thought about and played with it, the more I was committed to it.

If we go to Oregon, 1) we can get Mike Smith; 2) While it could be argued we had Scotty anyway, it would make it easier for him to attend; 3) I hadn’t hiked with Dan Heller since 2011, and he lives in Bend. Seems like a definite possibility.

One issue that I labored over was where to fly into. While Portland was on my list, I recognized quickly that the drive to the Trailhead would be over 5 hours, and quickly found alternative landing sites in Kennewick Wa, and Boise Id. Both had REI outlets, but neither was as beer appealing as Portland. Also, flying into Portland allowed us to pick up Scotty, and Mike and include them in a party van. Bonus could be achieved picking up Dan along 84.

It may not be clear to the reader yet, but it was clear to me, the organizer, that the more I looked at this area the more attracted to it I became, and the more committed I became to going here.

On a long weekend I actually printed out each quadrangle on 9 – 8 1/2 x 11 sheets with marks for alignment, and taped them all together. I then placed them all on the floor to get the entire wilderness established on my living room floor where I could walk over it in my socks, and examine potential routes.

There was a handicap, I soon learned. I didn’t understand this at first, but as I started to follow up my route exploration with written exploration I soon found out that there is a protected region in this wilderness called “The Lakes Basin” and in this area, group sizes larger than 6 are forbidden camping privileges. In addition, group sizes of 6 or less are forbidden fire privileges within a quarter mile of most of the lakes.

We love fire, and we love camp fires. That really didn’t hurt us, because I would simply have to pick camping location outside the Basin where we could have camp fires, and that would make us very happy.

I examined the weather conditions, and found that our current habit of going out in September would work well here. The higher elevations might guarantee moderate to cool temperatures. Why is this good? Well, I don’t like mosquitoes, nor do my pals, so targeting a time of year where a mosquito hatch is unlikely always seems like a good plan.

So, we have an area where we can plan a loop. Included in this area are scenic rivers loaded with native and invasive trout species. Also included are various lakes stocked with trout. We can hike through parts of the Basin, as long as we don’t camp in the basin. The only requirement, unmet, was how to lay out the trip so we could bag a couple of peaks. I seemed to fall for Sacajawea Peak right away, but it was located off Ice Lake which looked like a beast of a lake to get into, and it was in the Basin. So, group of 11 had to find someplace outside the basin, and frankly the topo map didn’t offer many options. In fact it didn’t offer any that didn’t mean camping down in the valley on the West Fork of the Wallowa River and simply hiking all the way up and back in a single day. Doable yes, but for a bunch of old men? (and one young dude).

Enough background. With three months remaining, it still seemed like a group size of 11 was in the cards, even without Jim Kirby who decided to take his wife to Banff for their anniversary. Jim was smitten with Banff, and wanted to share the experience with his wife, and so he was out. I had back-up folks, so large group still on. I didn’t like the idea of multiple drivers across such a wide swath of state, so I reserved a giant 12 passenger van with cargo space. Turns out the company specializes in renting vans to bands. Bandago. The product was a 12 seater Mercedes Sprinter diesel with sound system, navigation, and playstation 4. Room for all our gear, and room for us and beer. No beer for the driver. I placed a deposit, and the van was secure.

With the deposit, non-refundable, secured, of course it was now time for people to start dropping out. Names I will forgo, but Eastern Weather delayed projects for one participant; Chinese adoption took out another; family and work slew another; and then a mother with surgical complications felled the last one. Soon we were only six committed, and though I reached out to many, no one came forward with anything but regrets.

In the end it was just six of us, but we would have the company of Mike Smith, and Dan Heller during the car camping portion of our trip on Lake Wallowa. Unlike past years, the car camping location is close enough to a town, that we could outfit ourselves with breakfast and lunch, and then pile into the van for an evening at a downtown brewpub. Joseph Oregon had two such places, and we hit the first one late Thursday with only a short time to spare before the kitchen closed.

Without stretching this into too much detail, Kevin and I flew out Wednesday so that we could get the van in the morning, and take care of as much purchasing of supplies as we could before people started to arrive on Thursday. As it turned out we only cleared the van when Larry and Drew arrived, so we picked them up before hitting the Pearl district in downtown where we find the REI, Fred Meyer, and a state liquor store. We had just finished all of these and were on route to a Walmart to acquire ice and coolers when we got the texts that Walt and Mike were in. With the Walmart near the airport, we told them to hold tight, and we would get them soon.

Within a short time we were on Route 84 and heading East through the Columbia River Gorge. Hours later we climbed out onto a vast agricultural plain that seemed like it could swallow New Jersey whole, and then we were in the mountains and off the interstate. With a full tank of gas navigated Hells Canyon scenic byway all the way to Joseph where we had some beers, and ate some grub. When Larry and Mike showed, we took care of them, paid the bill, and drove to the camp site after hours, finding out sites pretty easily, and getting everything setup in the dark. Bed followed quickly, and the next day would be the real first day. Lots to do. Perhaps something to talk about. 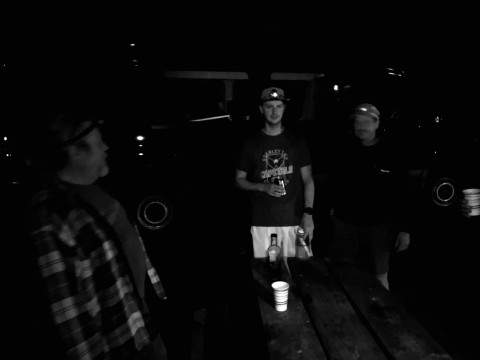 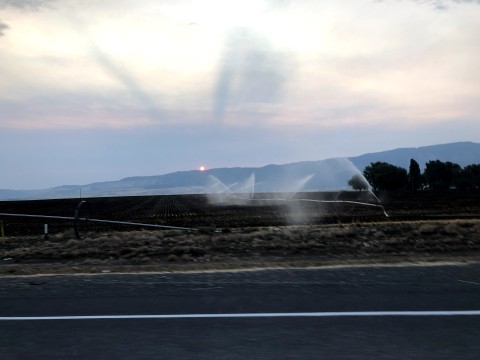 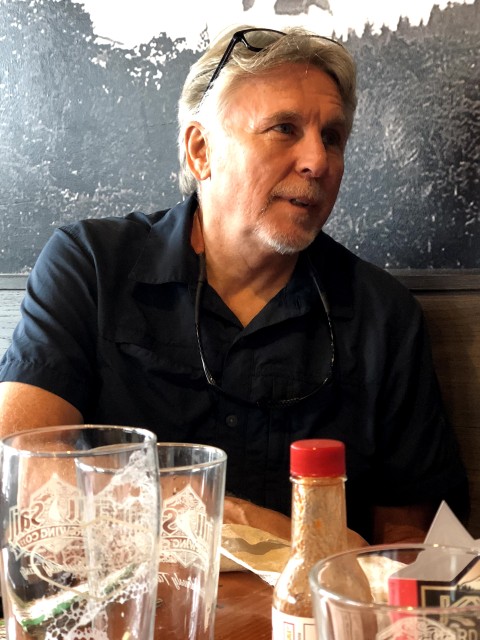 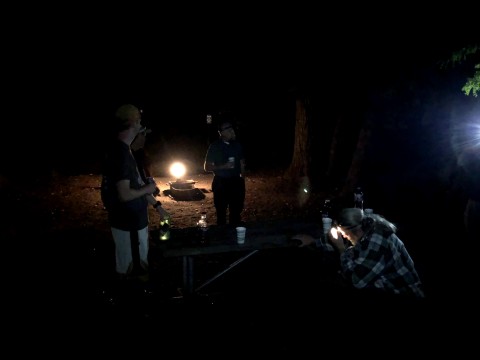 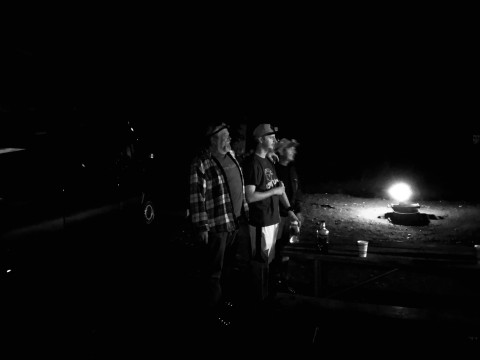 § One Response to Why The Eagle Cap Wilderness

You are currently reading Why The Eagle Cap Wilderness at Big Bird's Adventures.