Foliage is coming back

Picking up where we last left off, you may recall that for our first AT section hike in NY, I might have set a goal that was too much for us. Extrapolating from hiking the Rocky Point trail in Hartshorne, to hiking the AT in NY is not really a linear calculation. I told a little lie and said we were doing 17 miles, but that did not include the 2 miles we had to hike to get to the AT in the first place! That also didn’t factor in just how strenuous the trail along the ridge to the west of Greenwood Lake actually turned out to be. Beautiful yes! But also a real nutsack smasher, unless of course you were Susie, and I am not going any further with this analogy.

We had left the trail at Mambasha Lake in Orange County, and that is where we would begin. Andy took over the distance calculations, and set our end point at Tiorati Circle in Harriman State Park. This is an easily accessible location familiar to myself, and a few others on our journey. That cast of characters for this adventure was a little different than before. Susie could not make it this time, but we were joined by Jed, who after hearing that Andy was setting easier distance goals, asked if he could join us on these hikes. To quote the normally quiet and reserved Jed when my first hike was proposed to him, he responded “No fuggin way! That’s crazy.” And Jed was right. As Clint Eastwood said in one of the Dirty Harry movies “A man has got to know his limitations.” Jed did, I did not.

The question on the minds of Mike, Andy (maybe not Andy), and myself was “Could we have really finished the last hike, and really we just wimped out?” That is a really hard (easy) question to answer. Today was a new day, and our legs were fresh, so certainly we weren’t walking the trail with the same legs that we had the previous month. We had more Harshorne hikes in us, Andy and I had more Spin Class rides in our legs and lungs, so I think it would be fair to still say that we did the right thing. We probably would have finished the ride, however, we would have been soggy cream toast afterwards. Brain matter would have dissolved and leaked out of our ears. The trail would have been a mighty hammer, and we would have been simple brad nails getting countersunk deep into a poorly designed tabletop.

The section from Mambasha Lake to Elk Pen was not an easy section, nor was it just a couple of miles either. It had some decent climbing, some of it boulder scrambling, and we took quite a few early rests. Fortunately climbs were rewarded with views, and we took full advantage of them. One of these views, I famously enjoyed on my second day of a planned 7 day trip to hike NY solo, and after snacking, I picked up my pack and accidentally started walking back the way I had come. I remember it so well because I was so mad at myself, and I ended up adding an extra mile with my near full pack. We did not repeat that mistake, but I do recall the view where it happened.

I am writing this up 18 months later than the actual event. I posted the pictures in Facebag but I didn’t really write anything up about the trip. One thing to remember about the spring of 2014, is this was after the winter in which the term “Polar Vortex” became a toxic word in Conservative Media. We had ultra cold temperatures, and we had massive amounts of snow. Add to that we also had a fairly wet Spring, and this produced high water in all the creeks along the way. Not every creek has a bridge, as can be seen in the picture above.

A fine day for hiking.

The was shaping up to be a pretty nice day in May. Our first hike was in April, but in May, the bugs are starting to come out, so unless we were somewhere with a steady breeze, we didn’t hang around in one place too long. Had to keep moving ahead of the bugs if we wanted to keep from inhaling them. 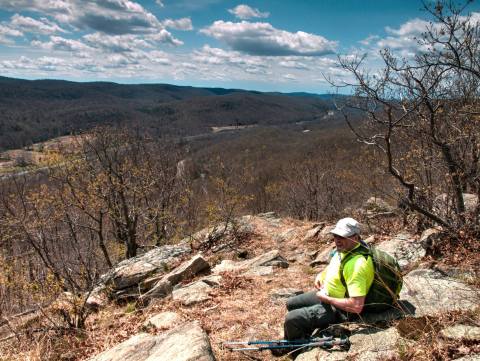 Overlooking Harriman and the Thruway

After enough eastern miles the trail comes to a steep descent with a fabulous wide angle overlook of Harriman State Park and The New York State Through-way aka I87. As is the case along most of the AT exposed rock, mostly granite keeps the area open and clear and provides plenty of fine ass planting reasonably comfortable places to sit and enjoy the view. I am pretty sure we ate the main part of our lunch, which for my included a mini half moon cookie-cake. 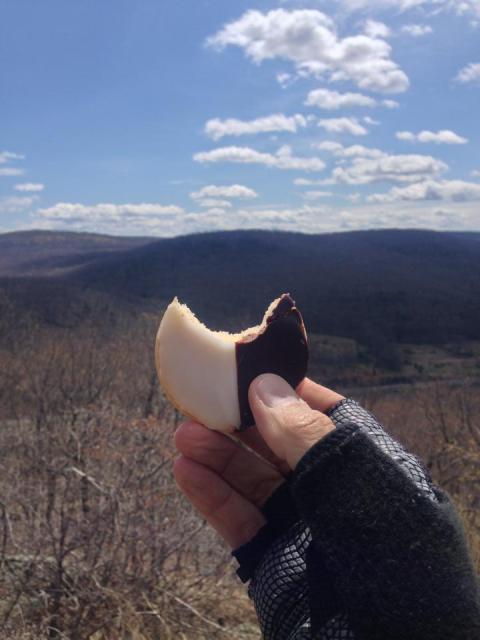 From what I recalled from my 1997 trip, this descent was pretty steep. I remember actually descending before in my Tevas, but in hindsight, with a backpack on I don’t think that was the best decision. No problem this time, as I didn’t have any Tevas with me, so down the trail in my Zambys. At the bottom, the trail emerges onto Route 17, which at this point is a four lane shoulder-less death strip. Route 17 bends from the South-East to the North-East at this point, so you can’t really see far enough for traffic moving at 55-60 mph so that you can get across all four lanes.

Another Hike of Views

Arden Valley Road is used to cross I87 which brings the trail to Elk Pen, our goal for the day 1 hike.  I am sure there is something to the name of this meadow, but we didn’t stop to smell the flowers. From here the trail crosses Elk Meadow, and begins a long rise up and into Harriman State Park. Elk Pen is a popular trail head, and today was no exception. We passed many ascending and descending day hikers, small groups, family groups, singles etc.

An interesting geological feature along the AT in Harriman is a remnant of the last Ice Age which today we call the Lemon Squeeze. The trail goes through it because it can go through it, though in winter it is safer to by-pass this because of all the ice that builds up on the rock. We didn’t have that problem today. Even with day packs, this is a challenge to get through, let alone carrying a full backpack. I was riding with friends last week and talking to Dave who had started doing some hikes, and may join us for future hikes we do. He started to tell me about a great trip he made to Harriman.

Dave: “Yeah, and the trail head was off this little road …”

Dave: “Is that what it is called? Yeah, and then we hiked up to this interesting rock…”

Everyone loves the Lemon Squeeze.

At this point we were only halfway through our 10-11 mile hike and the day looked like it was going to turn on us. The forecast was for scattered showers in the afternoon, however looking around it seemed like the scattering was gathering in our area, so we kept moving. Though I have hiked this section more than a few times, the necessary neural access to stored memories never seems to be sufficient for me to recognize where I am at any given time. There were still many hills to traverse, and many miles of ridge hiking to go before we saw our shuttle car. 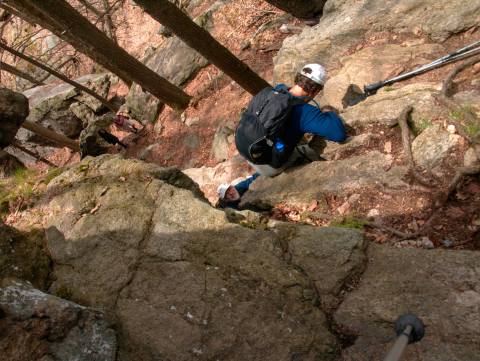 After some miles you come to the intersection of two North East scenic trails. The AT meets the LP aka The Long Path. The LP is no where near as old and traveled as the AT, however it does offer the hiker some fantastic hiking opportunities, as in the first 16 miles which begin at the George Washington Bridge in Fort Lee. The LP takes the high route along the top of the Pallisades and offers the most breath taking views of NYC as you will get any where. Here in Harriman though, the LP comes from the South East, crosses, and exits out of Harriman to the North West, continues North and snakes its way up through East Central NY to Albany and then up to the Adirondaks. 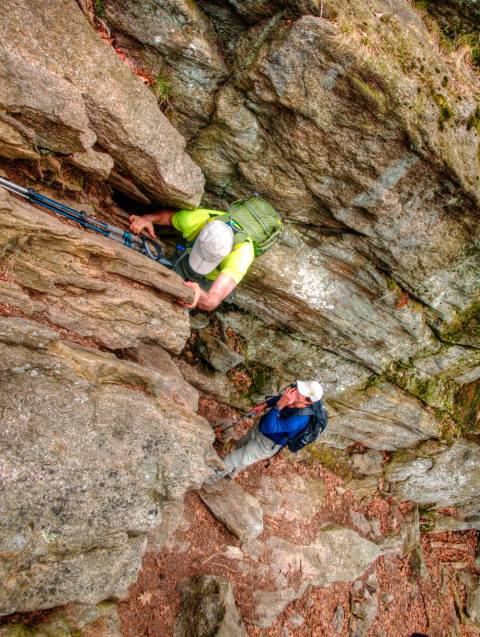 Another View of Lemon Squeeze

We start to feel drops. Some of us came prepared for rain, and the others did not. With my camera attached to my Cotton Carrier Strapshot, I did stop and stow my camera in its case in my backpack and suspended my visual recording of our adventure. As is the case with the term “Scattered” it comes with other inherent qualities, and one of them is it is not drenching, and it is not steady. So though drops started, they never intensified, and soon the clouds parted enough that it seemed likely I could get my camera out again, so we stopped one more time.

The last feature along this section of the hike was The Fingerboard Shelter on the AT. For me this place was a much needed shelter in 1997. I was exhausted when I got here, it was late, water was not easy to get to, and the weather was turning. There were some other occupants, but fortunately there was room for me as well. For water you had to hike down the hill towards Lake Tiorati and if the stream was running, use that, and if not, then it was the lake water you took. As it turned out that was my last night of that trip, as a 3 day storm moved into the area and made hiking miserable.

After a couple more of those fleeting scattered showers, we arrived at the Lake Tiorati Picnic area which was down a side connecting blue trail off the AT. As with the last hike, there was a cold six pack of delicious craft brewed beer in a cooler waiting for us, and we quickly devoured every ounce. 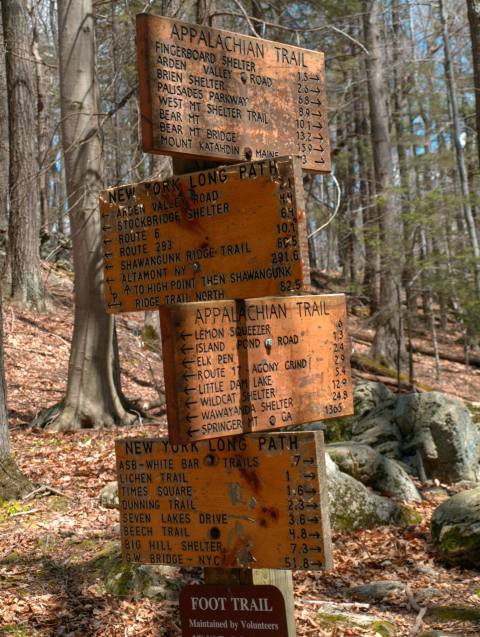 Intersection of AT and LP

So, it would seem that our mileage capabilities was right around 11 miles, plus or minus. At least at this point that is what feels doable, after you factor in the car shuttling and the amount of time it takes us to get to and from the trail heads from home, that makes for a pretty long day. 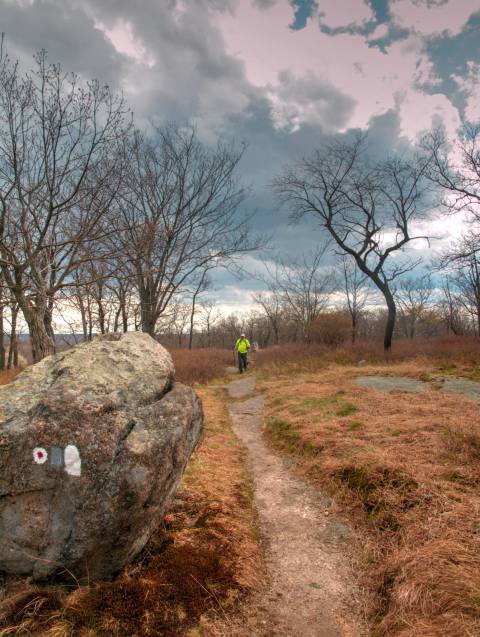 Our next section would take us from Lake Tiorati all the way to Bear Mountain, and everyone in our party was looking forward to that.

You are currently reading NY AT #2 at Big Bird's Adventures.