I first heard about the High Uintas thanks to my brother-in-law Walter Everetts, who after we did the Zion Wilderness in early May 2011, gave me an issue of Backpacker magazine that to him, was done. The title article was a story about a hike along the High-line Trail along the spine of the High Uintas in NE Utah, east of Park City. The Uintas are an E-W running sub-mountain range of the Rockies, and along with The Brooks Range in Alaska, are the highest EW mountain ranges in the country. I was going to say only EW, but I am having trouble corroborating that with matching Wikipedia source material. 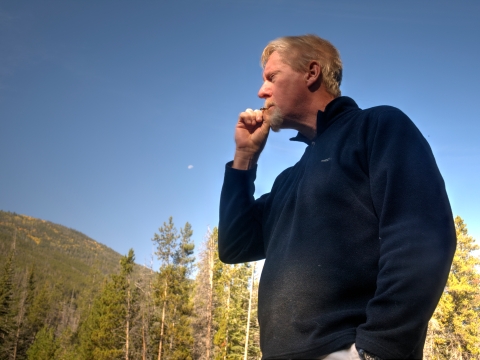 I know it doesn’t make sense some of it. Out here is the wilderness surrounded by nature, and we engage in vices. Here, both Greg and I brought fresh Bugler tobacco with rolling papers. It is so pleasing to roll a nice cigarette, light it, and enjoy it in such a surrounding.

The High-line Trail runs approximately 70-90 miles along the main spine of the Uinta mountains, and dips into the inter-pass basins. This area is described well in John McPhee’s classic book “Basin And Range”. The story I read was one man’s solo adventure along the trail, covering 10-12 miles a day, and camping and occasionally fishing in the many high lakes and drainage stream head waters. Catching native Cut-Throat, and stocked Brook Trouts, which supplied him with a supplemental protein snack when cooked. 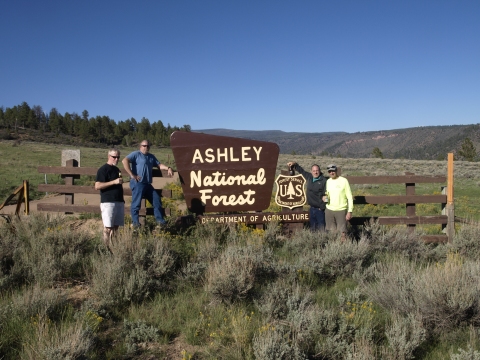 Could have should have gotten out the tripod for our first group picture.

I have to admit, I was kind of hooked right at that moment. Upon returning home, I immediately ordered the National Geographic Trails Illustrated Map #711 titled: “High Uintas Wilderness”, and awaited its delivery. 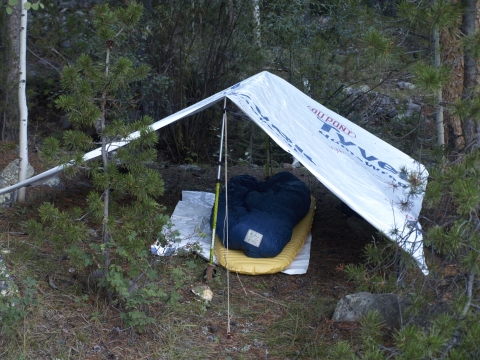 What could be simpler than a waterproof material that weighs next to nothing, and is relatively cheap? Priceless.

The US Postal Service came through, as it always does, and I began to pour over the map; First examining the High-line Trail and its many source trail heads. See, you don’t have to do the whole thing, as there are many points where you can jump in. I was thinking we would spend a week and end at Mirror Lake. The problem with that is it requires a 5 hour shuttle to the starting point, and unless we could get someone to drop us off, the logistics just seemed to me unmanageable. 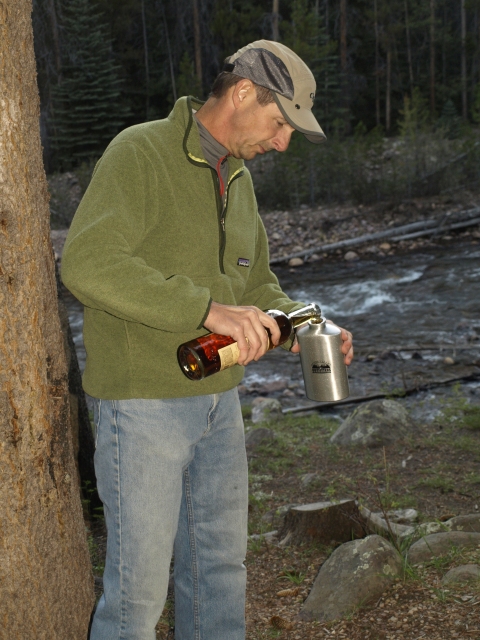 Find yourself in Park City Utah? Well a couple hours at High West wouldn’t do you no wrong.

We would need a circuit hike where we could go in and come out at the same point. Fortunately there are more than a few trail heads that offer just that capability! 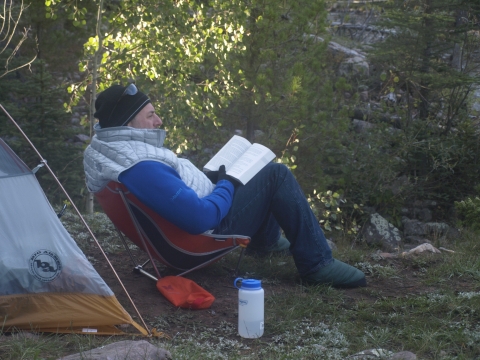 Andy and I were the first up Saturday morning. We didn’t have much on the plate for the day. Breakfast, fish, sort, prepare for adventure.

Another year passed, and I took a group of friends, some of whom were on this trip, and we did 6 days in the Grand Canyon together. Upon completion of that trip, there was active banter concerning what trip we would do next. Yosemite, Kings Canyon, Sequoia, The Grand Tetons, and The High Uintas were all mentioned. After some pros and cons, we all decided on The Uintas. So now I really had to find a route. I put some ideas out, and Larry T Butler mentioned that we should try and do a route that offered the chance to summit Utah’s highest peak: King’s Peak. I quickly found the Swift Creek access point, which had camp sites for trail head camping, and it offered the ability to visit three basins in which we could fish, and get a couple of aggressive days hikes in to summit Kings, and at the time, Mt Emmons. We all agreed; A two year time frame was established; I researched the weather; With all this input I decided on the middle of September 2014 from the 14th-21st. I looked ahead and saw that the moon would be waning, so we would start out with dark nights, and if the skies were clear, we would see stars!!! Next I found a mountain weather site for Utah mountains that listed temperatures at 8200, 11,000, and 13,500 ft. The trail head was 8400, and we would spend a majority of our time at or just below 11,000 and it said that nighttime lows in the 30’s, with some nights warmer, some nights colder. Daytime highs in the 50’s and maybe 60’s; Really, that all depending on the clouds and the beautiful sun. With temperatures like that, there would not be any mosquitoes!! Also too cold for snakes in general, and really I like the cold weather better. I sleep better in it. 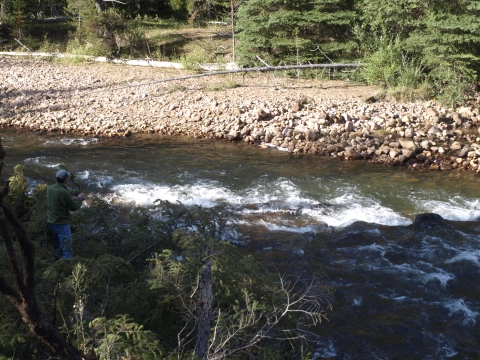 Larry showing some dexterity in getting out on a fallen tree into Yellowstone Creek to try his hand at the bubbly section. Alas, no fish.

We had a destination; We had a time frame; We had a lot of interest! I was looking at the eight who accompanied me into the Canyon as for-sure-dude, and then there were potentially my new friends I made backpacking with my brother-in-law. So potentially at that point I thought we could be 14 people. That is a lot of people, and after actually doing it, I see that we never could have done that. Fourteen was a hard limit, as although there was no permitting process for this area (unlike the Grand Canyon), there was a limit of 14 in one group. The only way 14 can go in, is to go in on horseback with pack animals, where you can cover 15 miles and get to the upper basin where there are large tracts of coniferous open ground to set up that many tents, and graze the horses. No, we had to be a smaller group, and as it turns out, it didn’t take much effort to achieve that. This just isn’t the kind of trip that a lot of people can commit to. 3-4 day trips work out for many, but 7 days on the trail and at least two travel days means you need 9 days. Add with the elevation challenges, perhaps you want an extra day out there, and now you need 10 days. So that brought us down fairly quickly and we were settled on eight for a long time. 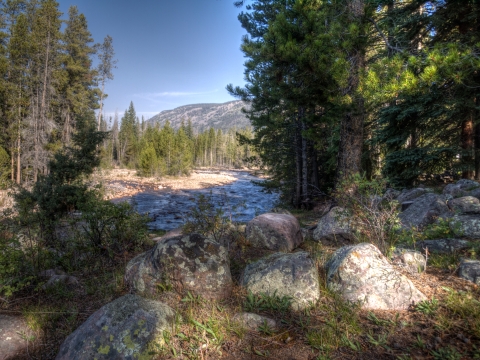 Our destination for the next few days would be the head waters of Yellowstone Creek.

As this summer approached, we made plane reservations. That act alone shows commitment, and 7 of us had our reservations ready. D1 (Ally Hallander), didn’t want to commit yet, and that was probably wise. She was already on the hook for 3 girl friend’s weddings, and she needed 6 work days for this trip. Early this year she started sending out resumes and the process of a new job began with a company in NYC. She was interested in moving back to Jersey, and ending her career at Electric Boat. All that eventually worked out and she got the job, but she still had to do the weddings, and she just didn’t mention the Uintas thing, so I started to sense that she just might not be going. When we were one month out, I had to put the question to her, and she needed to put all her focus into making her new job her priority for now. Understood. 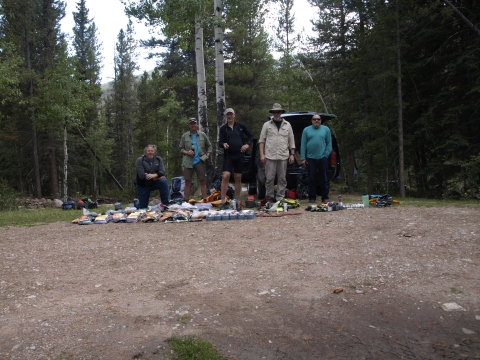 Just a simple demonstration of all the common shared items to pack. All the dinners were considered shared because until this moment, no one had any idea what they wanted to actually eat.

We were now Seven. I ordered the gourmet freeze dried foods. 7 of us, 6 nights, so I ordered 6 quantity each of Black Barts Chili, Mountain Chili, Orange Hawaiian Chicken, Three Cheese Lasagna, Three Cheese Chicken Pasta, Cheese Enchilada Ranchero, and some other meal that escapes me. What didn’t escape any of us were the effects of these fine foods on our bodies. That however, I will leave for a reader exercise…. 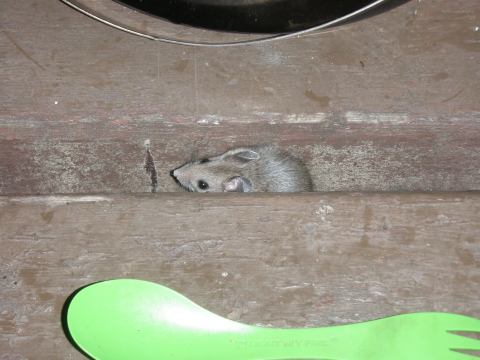 A visitor to our table that night who happened to startle the big blond hairy guy with the pony tail.

We would be Jim Kirby, Larry T Butler, Greg May, Andy Shoneman, Mike Barris, Walter Everetts, and myself. We made reservations for two cars, hotels on leading side, and on the trailing side of the trip. Walt and I made trail bars, he also, made beef (great), chicken (Good and tasty), and turkey (not so good) jerkies. We would pick up bulk supplies for breakfast, and hit Recreation Equipment Incorporated (REI) for fuel and we would be ready to roll. 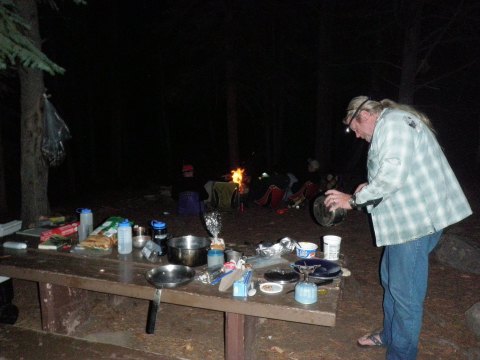 Plenty of stuff left on the table to attract interested parties.

The plan was for most of us to arrive September 11th, and Walt in the 12th. We would handle all our shopping on the 12th, and we would drive up the 13th to spend 1 night at the trail head, and Sunday we go in. That wasn’t the original plan. Originally I figured I would go out Thursday, and everyone else would come in Friday or even early Saturday. I would shop, and pick them up at the airport, thus saving them a day, but, as it turned out, everyone was nervous about the elevation. Altitude Mountain Sickness (AMS) was real, and if you didn’t play your cards smartly, you might experience a mild case of it, though there have been serious cases of it at the altitudes we would be facing. So most everyone came out Thursday. 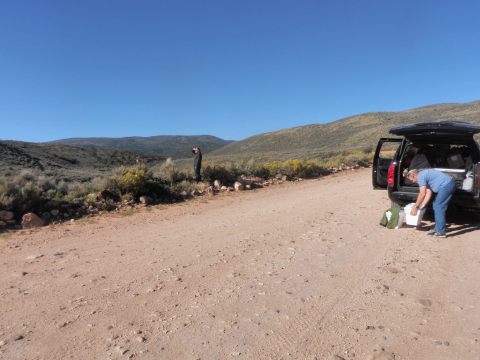 We decided that as soon as we hit dirt road, it was necessary to get some beers out of the cooler for the final push to the trail head.

That is when I started thinking “If we are all here, then maybe we should cram all the shopping into Friday morning so that by the time Walt came to town, we perhaps had only to buy campsite beer, scotch, and then why not just head up to the trail head and spend two nights there? Hell, it would be cheaper by the cost of two hotel rooms vs. the cost of the camp ground ($8), and we could acclimatize there. Also we could fish all day, and take the time to organize all of our common stores for the trip. So, that is what we did.

PS. Two days before we were to leave, Jim’s 91 year old mother was moved into Hospice care, and he rightly felt that it would not be a good time to be away, and dropped out.

PPS. 5 hours before we were to be off the grid, Mike Barris got a call from his sister in Toronto. Their 91 year-old mother was moved to the hospital and was day to day. There was only one real decision for him to make, and we dropped Mike at the airport to return home when we picked up Walt. Sadly, Mrs. Barris died this morning.