First day on the trail.

Full packs carrying everything we think we need with calculated duplicates (cat hole shovels, TP, pumps, etc), and starting out at 8400′ elevation. Destination is the trail junction up to the Garfield Creek Basin. The trail head sign says 9 miles, and the trail follows the Yellowstone Creek the whole way. It is important to keep in mind that this is a high basin that gets a lot of snow in the wInter, so the trail cannot follow the creek at its current water line. Therefore it meanders higher above the creek at times, so there are gains and losses, but in general we gain elevation the whole hike. 9400-9600′ is the final elevation for the day.

At The Trail Head

The day began very much like the preceding day other than our anxieties about the upcoming hike and whether we had what it would take to complete the entire adventure. We began with a breakfast of ham and eggs, thanks to my BIL Walter Everetts, with a side of campfire toasted sour dough bread, and a glass of full pulp not-from-concentrate-shit orange juice from Tropicana. Once again, a fully satisfying meal. We all packed up our gear from the trail head camp site. For me, this would be the first time I had to pack up my Tyvek tarp in a way that I could carry it. Turns out that wasn’t all that bad, as all I needed to do was fold it 4 times, lay my ground cloth on it, and then roll it up with the stakes, and my sven saw. I saw the tarp as a way to safely carry my saw without damaging my pack.

Swift Creek just prior to entering the wilderness boundary.

With appetites satisfied, and camp broken down, and cleaned up, (we scoured the site for all evidence of our passing), we packed our packs, and made final decisions about what would go, and what would stay. I for one made the decision to not pack my rain pants (later to regret that decision), and that I would also not pack my solar charger and battery. Because of this I would not use my iPhone for anything other than navigation when we needed it, and maybe a few pictures, but I just couldn’t see taking that extra weight. The last items I left behind was a number of beer concentrates. I felt that for 5 people, that 60 was probably enough. Turns out it was more than enough, and no I didn’t carry 60, but that was apportioned out to everyone.

With the truck moved to trail head parking, we got our pictures by the trail head information sign, and we began our journey. Blue sunny skies, cool temps in the 50’s, loaded packs, water, and ambition. Destination: forward.

How much do the packs weigh? That is a damn good question that I don’t really know the answer to. You could say, that when I checked my pack at the airport in its duffel, stuffed with most of what I would take along, the scale tipped right at 50 lbs. but realistically, I had more beer concentrate in there than I would take along, and an extra saw, and perhaps some more stuff that didn’t actually go on the trip, but I would say it had to be at least 40 pounds. Maybe it was closer to 50. In any case it was a new internal frame Osprey 85 and it fit very well. I was able to tighten the hip belt around my no-fucking-hips waist, and draw in the shoulder straps, and pull in all the slack-taker-uppers and the fit felt great. Two poles, my broken in Zamberlan full cut backpacking boots and I was set to go.

Where there is Aspen, there are Beavers

The thing about a full pack is that every step feels like you might be taking a full step, but in reality the actual step is just a little bit shorter. Those shorter amounts add up into steps, and those steps add up into lots of steps, and those lots of steps add up to a bunch of lots of steps, so that about the time you are getting hungry again you feel like you might have traveled 5 miles, and your mind overrides your eyes looking at the map and convinces you that the surrounding features are the ones on the map that say you have gone 5 miles, and then Andy Shoneman‘s tracking device says you have gone 6 miles, so you stop, take a rest, have some refreshments (water), and eat the nice bagel, ham, cheese, hummus and tomato sandwich that my BIL made, resting weary legs and shoulders, only to begin hiking again and then only to come across a switchback that you weren’t expecting, which following the regrouping and the map checking for real, again trying to logically dismiss what your eyes are telling you (That’s a horse head, not a switchback), and then finally realizing that you only went 3 miles, and you still have 6 to go.

Where there is Beaver activity, there are Beaver ponds. The home is there on the right.

Let’s add to this mix, the observation that whenever I asked Andy how he was doing, his first sound was usually one of those coughs that come from deep in your chest, and he wheezes out an “I’m okayyyyyy” in a tone, that if you know Andy, is clearly a half octave higher than his normal monotone voice. It was at this point that I started to think how my original agenda might be modified. Larry T Butler it turns out was thinking the same thing. 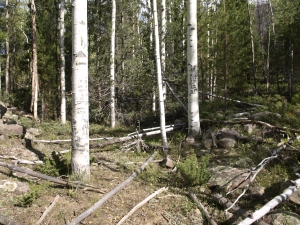 I suppose with so many Aspens within an easy hike of the trail head, perhaps we shouldn’t be surprised at the number initials and who were couples when, and just general carved markings found in all the trees.

My BIL Walt taking a rest at the base of a rather large and extensive talus slope.

Suffice it to say, that this early section of the trip was not exceedingly difficult, and there weren’t really any rules that said we had to do exactly what I planned out anyway. All I did was do some rough sketches with MapMyHike, and try to carve out something that was doable. The only real requirements that I felt we had were:

Greg didn’t train much for this “Walk in the Woods”, but he held his own quite nicely.

So, with the afternoon passing by and realization that we might not make my original destination, and keeping in mind, that there was nothing that actually said there would be any camp sites at the trail junction, Larry and I struck out ahead of the pack to scope out areas off the trail that would be suitable for camping.

What are the rules for wilderness camping? 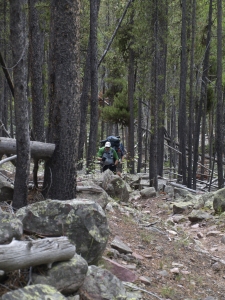 I spent a little too much time on the front the first day. That of course gives me plenty of time to set up any shots of my friends coming towards me.

Suffice it to say, that Larry and I both glanced off to our left at the same time and saw a promising flat area. Keep in mind, that aside from the creek, and lower beaver ponds, most of the terrain we had been passing through was rocky and not flat, so when you see a flat space, it has to be investigated. Upon reaching this area, I noticed another larger flat area just below it and adjoining the rim of the creek canyon, aaaaaaaand, that flat area had an existing fire ring. Bingo!

I dropped my pack, returned to the trail, and placed a large stick into the middle of the trail so that my buds would see it and know the end of the day was upon them.

Andy can make any rock look like it is a chaise lounge.

At that point everyone wanders into camp and there is flurry of activity. Everyone begins to unpack, and get their night’s shelter together. For me, that would be setting up my tarp; for everyone else that would be setting up their tents. Larry and Greg in one tent; Andy and Walt each in their own tents. I chose the tarp, because I wanted to sleep out, and I snore, and didn’t want to be a burden on the others. A minor issue, is I inherited my Mother’s bladder and would and did get up a lot at night.

Once tents are up, then chores have to be done: Water has to be pumped, wood has to be cut and gathered, the fire has to be started, the stoves have to attached to the gas cans, and the food area has to be selected so that the water boiler can get to each persons fine tasting freeze dried gourmet dinner. Chairs have to be assembled, whiskey has to be brought over, and on this trip, the newest luxury had to be started: beer concentrate had to be turned into just beer.

Meta – Sedimentary. This area was glacial, but it is also two miles in elevation, so I don’t believe that means that glaciers here were very thick. Also there just isn’t the kind of igneous basalt base rock that you see in the Sierras. However here is a large boulder that could be a glacial erratic, or it could just have fallen down from up high. There is “up high” around here.

At some point, we arrived in a section of the Yellowstone where it had been successful in carving a canyon into the rock. It might only be a couple of hundred feet down and across, but it is still substantial, and it makes getting water limited to side creeks that empty into it. There just are not any (or at the very least many) ways to get down to the main creek itself.

A vertical panorama. It doesn’t really give you a measurable point of reference even though that tree to the left is about 4 feet high, you can’t really extrapolate to the depth of the canyon.

An evening progresses, and contains any of the following activities, some of which can be repeated at any time and as many times as is necessary.

At this point this day, Larry and I were off up the trail to find a campsite. Larry felt rightly that he should lead since it would keep me in check from utilizing my lengthy stride to its full advantage.

And at some point, since we are all in our 50’s (except for Andy), we decide it is time to turn in, and we beat down the coals of the existing fire. Realistically we hadn’t added any new wood for awhile, so it is just coals. And then we all retire to our separate, or shared sleeping quarters as the need hits us.

The first day has had us in the trees most of the time, and the opportunity to get some views up stream, or anything open at all were limited.

That is a day on the trail.