“Can we go home now?” It was a question on everyone’s mind at that moment. Out of the 7 of us, only myself and two others decided to do the final steep leg killer climb up Takalousa in Holmdel. What was cruel, was I had taken them up the long 3 tiered Telegraph Hill Road climb within sight of the top where my pre-programmed route was to hang a left and descend through a neighborhood cut through to get to the base of Takalousa. By this point we had close to 4000 vertical feet of elevation in our legs, and we had been on our bikes for nearly 6 hours.

Inspiration for the ride came from a recent post by Alex, another of my good cycling friend buddies, that referenced a ride around Pittsburgh, PA on the Saturday after Thanksgiving called The Dirty Dozen. This being a 100k beat down sufferfest ride around town taking in 13 (A Bakers dozen really) of Pittsburgh’s toughest climbs. When I first saw this post my reaction was one of betrayal. Here I have been married to a Pittsburgh area family, that has always been well aware of my level of cycling enthusiasm, and never once did anyone ever say to me “Hey idiot {Son|Brother}-in-law, you can beat your brains out on this ride around town and then we can have a beer or 14!” Completely ignorant of this blessed event they apparently were and to my loss all these years.

I mulled it over a little, and by this point of the year it was clear we weren’t in for a repeat of last year’s duathlon event: Sufferlandia 2013, that we had run in Hartshorne Park where we did 7 controlled laps down to the Sandy-damaged pier and back up the leg biting climb to the parking area. This was followed by a run from the Rocky Point Parking lot to the Buttermilk Valley lot and back along Cuesta Ridge. Last year we got just enough rain the prior night to melt the 4″ of snow that had fallen by 7PM and none of that moisture re-froze, so the bike path was deemed safe. Alex and Cliff had put that event together, and both were busy this year so if we were going to do anything, someone had to step up to the plate.

My family decided this year to be real low key for Christmas. We booked a two week vacation in Barbados for first two weeks in February, and we wouldn’t do anything Christmas day except a nice family dinner. So when every other household got up Thursday the 25th to hang out around the tree, I sat down at my computer and set out to engineer my own 100K challenge right here in beautiful Monmouth County. Monmouth County offers many opportunities for ride construction, however for this ride, since it would be a cold weather ride, it needed all the hills I could reasonably cram into a single ride. When it comes to hills in Monmouth County, we don’t really have anything that is super long, because we just simply don’t have terrain that includes big mountains. But we do have some hills, and we do have some roads that go straight up some of these hills, and if you pack enough of them together, then pretty soon you are talking a pretty significant amount of elevation gain for a ride.

We needed to start climbing soon, so I targeted Navasink, Atlantic Highlands, and Highlands first, making sure that I included most of the best and steepest this area had to offer. Once we started, the concentration would be high, and it would take some time to cover. Climbs of importance had to include Constitution (short leg burner), Hooper (short super duper leg burner), Mountainside (unbelievable short leg burner), and Twin Lights (Another leg burner) and throw in as many other less steep but still extensive climbs in between.

Afterwards, we would need to move over to another section of the county where we could climb, so Navasink River Road to Nutswamp take us into the Holmdel area where there are plenty of hills to add. I wanted Pelican, Red Hill Road, Cat Bird Alley, Holmdel Road, Telegraph Hill Road, and Takalousa. By this point I was near my 100K limit, and I had left out Nolan, Collier, and Line, which broke my heart to omit, but I wanted a ride that would not kill anyone. It IS winter after all. This is the result of my work. Pretty dense early on, and then a little more spread out later in the ride. Opportunities for people to shortcut some of the climbs if they chose, and if not, then 100K of a leg burning lactic acid cocktail.

I chose to put the route out there, and challenge my cycling friends to come out on New Years day and get 2015 off to a great cycling start. Unless it was raining, or the Arctic Vortex had left us with feet of snow, we could in all likelihood set out at 9 am and cover this course in about 6 hours. 5 hours of actual riding, and the rest of the time used up in re-gathering time. The format would be simple. We aren’t racing to the climbs, and we aren’t racing when a climb is done, so take each climb at the pace you want to, and we will regroup at the top or at a place of safety. For example, Navasink River Road is busy, and doesn’t offer any regrouping areas, so we just have to move on there until a safe opportunity presents itself. 9am was chosen for two reasons, the first being we will give whatever sun presents itself, a little time to warm the air, and secondly it was the day after New Years Eve, so let’s not get people up TOO early.

I posted my route on our group Facebag page, and waited for an onslaught of volunteers to present themselves. Right away Alex loved the route, but he was busy with work and asked me postpone till the Spring. Others chimed in about family skiing events and other things, but I had a couple of commitments from Douggie and Bobby, our two-peas-in-a-pod non-brothers brothers. I think we piqued the interest of Robert D, who mentioned skiing, but after a little loving encouragement from Douggie, decided to make a go of it. Robert D has his own twin, Stacey L who decided she would come out and play as well. Those were the only respondents other than Cuban Ray who might come out if the weather was more Cuban-like, and less Vermont-like. Alas, the weather turned, and it was more Vermont-like though we were in for some sun.

I awoke that morning, had my usual Oatmeal with dried cranberries, light brown sugar, blue berries and pecans, when I took a gander at Facebag, and lo and behold, we would be getting Charley and The Belgian Hardcore herself: Meredith CJ. Excellent news! It was 19 degrees when I first looked, and by the time I was ready to ride over to Pronto, it had already warmed to 25. We were to meet at 9 and roll by 9:15. As usual, my attempt to void myself early was for naught, and as I was suiting up, I got that feeling in my bowels that I still had some unfinished business. Fortunately I still had enough time before I had to be over there, so I gave myself the time I needed and then I ventured out to play.

On the way over I could feel my legs telling me how much they really wished, I had made a stronger attempt to get to spin class over the last couple of weeks to prepare for this. Technically I hadn’t done much in the last two weeks except a training ride with some friends down in Manasquan this past Saturday, and that just wasn’t enough. It was cold, but there was no wind, and the sun was bright. I was cold after the 3 mile ride to Pronto, but I knew I would be alright, if I just didn’t get carried away on the hills. Bobby, Douggie, and Charley were inside when I got there, and Stacy was in the Acme lot getting her things together. Robert D showed up soon, as did Meredith CJ. We stayed there until 9:10 and then started donning our final layers for the ride. No one else was going to join us, it would be in the end just the seven of us.

When it comes to the details of the ride itself, I will limit the story to simply that each hill was a challenge in itself. Douggie and Bobby proved to be in much better shape for this time of the season than anyone expected, and Douggie was actually climbing well. We lost Meredith CJ once when I hadn’t accounted for her actually dismounting her bike to descend Mountainside, and so we were well on our way up Grand when she got down, and lost track of where we were going. Fortunately we realized this at the top, and raised her by phone, and were soon reunited.

The summary of the day simply states that when it comes to embarking on a sufferfest, then it is best to share that experience with some like-minded friends to suffer with. It was a great group on a great day, and we were all pretty well spent when we rolled back into Pronto 6 hours later for some sugar drinks and potato chips. Write this up I would, and use it as inspiration to see what we might be able to do next year. I don’t think I want anything as big as The Dirty Dozen, but I would hope to have something we can all look forward to on a yearly basis. 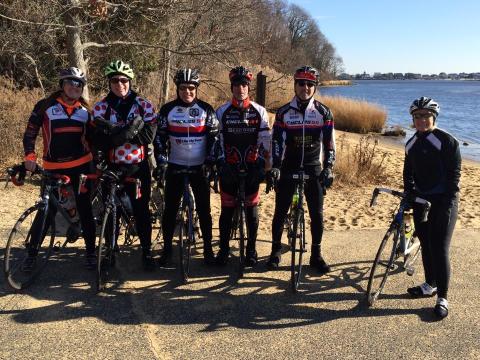 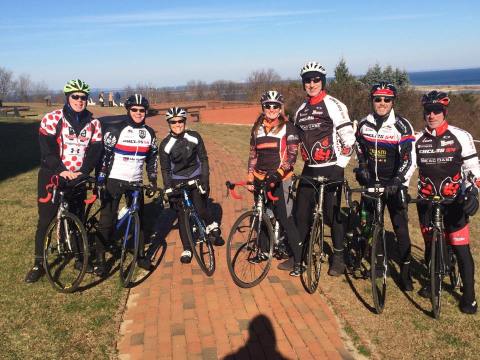 Up on Twin Lights 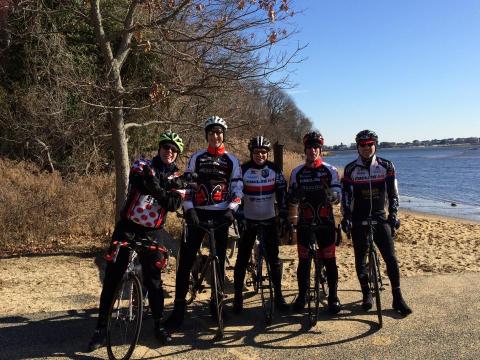 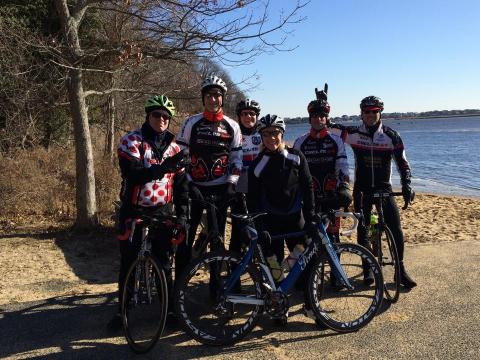 You are currently reading Sufferfest 2015 at Big Bird's Adventures.