When Susan and I moved to Little Silver, we joined the New Comers organization and through our involvement became acquainted with Mike Barris and his wife Bonnie Marvel. Our wives met, either directly at one of the socials, or maybe one of the book groups that form as a result of these social arrangements, and it was quickly established that both of their husbands were hikers, and had to meet.

Meet we did, and it wasn’t long before Mike and I took a week off and backpacked the NJ section of the Appalachian Trail, North to South. We have backpacked and hiked many times together over the years, and this was simply another outing.

Mike is a journalist and a musician and an accomplished authority on Frank Sinatra. Mike has taught workshops on Frank and has sat on various panel discussions when those panels need a good referenced source. As a musician, Mike plays guitar and keeps a loose gathering of friends in touch so he can put on a few gigs througout the year.

Being a journalist, Mike always asks questions. You cannot simply say something to him without him coming back with a question that is designed to get you thinking about the subject more than you did by simply making the statement in the first place. This shouldn’t be interpreted as “be careful what you say in front of Mike” but, you should be prepared to provide answers to questions you may not have thought about.

At some point in this trip Mike said to me “You know, I think I might be a much better hiker than I am camper.”, and in some ways I think Mike might be right. Mike has come on Winter trips with me before, though Winter was challenged once when we went to Dahle Sods in WV and the nightly low was only 43, but we did Mountain Lake Wilderness together as well and that was a true winter experience with Rhyme Frost on all the trees and vegetation above a certain elevation, so he isn’t without experience in the cold and the wet. Exceptions have to be made in some cases, because what Mike lacks in camping skills, he makes up for in stimulating conversation, and basic camaraderie. I don’t think there is anyone on this trip that wouldn’t want to go into the back-country with Mike again, because he brings a wit to these adventures that no one else does. For that I am thankful. 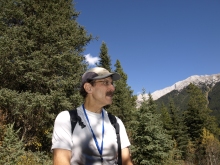 Climbing out of the Back-Country

On the way out of Wildflower.

§ One Response to Banff – Mike Barris