This installment concerns Mike Barris, who has attended all my trips except the High Uintas. I profiled him two years ago, and something I left out of that narrative was that Mike returned from that trip not feeling well, and then proceeded to get pretty sick with Bronchitis. I think it took a long time to get on the good side of that, and it left Mike wary of further trips.

He did eventually recover, however he encountered further complications, where upon many visits and follow-up visits to various professionals, it was determined that Mike suffered from exercise induced asthma, and prolonged ignorance of the symptoms can and does inflame Bronchitis if an infection develops. By itself EIA, does not lead directly to Bronchitis, and treated properly, should not hinder the individual from outdoor activity. It took some time for this diagnosis, and during that time Mike was pretty definitely sure he was not going to a part of future adventures with me. At least not the ones last more than week, and spend time above 6000′ of elevation.

Medicine. The miracle of the modern age. With his Bronchitis under control, and his EIA diagnosed and a prescription issued, Mike began to come out hiking again. We haven’t done any ambitious day hikes in a while, a couple of years actually, but our morning jaunts into Hartshorne, a county park in Middletown, are a good challenge, and before he was issued his prescription, it seemed that even those, were on the chopping block.

Also in the last two years, Mike moved from one Chinese news organization to the South China Morning Post (SCMP). Unlike his former employer, Mike found he liked the management of this paper better. The hours would be known, and regular, and they hired him as an executive editor, and over the course of the first few months, Mike gave them a lot of material to be proud of.

So, in better health, and happier at work, it was on one of our Hartshorne hikes that Mike floated his interest in coming to Oregon. By this point the overall group size had already started the dwindle as work and family commitments took precedence, so I was happy to have another body on board. The more the merrier! I told Mike “You are always welcome on my trips, and I hope you do come.”

As the departure date approached, I tried to make sure I got into the woods with Mike at least once a week, Wednesdays usually, and possibly Friday if I could. Another regular on these morning hikes, Jed, was suffering from broken toe, and was having issues stabilizing and isolating that toe, and wasn’t making any healing progress. That was the period of “Well I’m just going to tone down my hikes to just Hartshorne and I should be fine inside of a week”. Here it is 3 months later, and Jed is only now getting out again. Anyway, back to Mike. Physically, I don’t think Mike was suffering anything, mentally, I think he had some reservations about what kind of shape he would be in. I think between his dog walks, and getting out to Hartshorne, as long as he maintained a pace he was comfortable with, he couldn’t possibly be the slowest person on the trip. That was reserved for others.

During the last few weeks we discussed a number of items. The most important in my mind was keeping Mike’s pack as light as possible. So, I told him to bring his 3 season tent, and I would carry it. He and Andy could sleep in it, and I would sleep out under my new lightweight tarp. I didn’t want Andy carrying too much either, but that is a different story. Also I told Mike that we would be near water a lot, and that personally I wasn’t going to carry more than 1 liter of water with me. If I ran out, I would stop and treat water during a crossing of the many drainages that I was sure came off all of those mountains. Water weighs a LOT. Mike also suffers from, though perhaps not diagnosed, a restriction in blood flow to his extremities. The short answer is he feels cold before the rest of us do, and so he is going to pack more clothing than the rest of us. After a personal pilgrimage to the REI in Princeton, Mike came home with a few new items that were sure to increase his comfort level on the trip, the prime acquisition being a new rain shell. He wore that a lot, so money well spent.

Here we are back, now into our second week, and the aftermath of this trip is completely the opposite of his last outing. Mike came out of these woods stronger than he went in. He impressed me, and more importantly impressed himself that he is still more than capable of tackling a challenging adventure, because make no mistake, I didn’t take it easy on these people. We put more miles in on this trip than any trip I have run to date. Mike came out with flying colors, and has had no post-hike issues either. He took his medicines everyday and kept his EIA at bay. I don’t think I ever heard him complain about his breathing. The chill? Well, he complained about that a lot, but he had enough layers to throw on to handle that.

Lastly, I will say that Mike did show me something on the last day out. Usually, I am the first one up, and before I leave the tent, my sleeping bag is stuffed, my liner stuffed, my pad deflated rolled and stuffed, my new lightweight pillow stuffed, and I am dressed and ready to start the day. Out of the tent, and usually, where I could, I would start a small fire just to warm our hands. Mike, meanwhile played the “I am warm and comfortable and I don’t want to get up” game, and was always the last one out of his tent. On the last day, we had discussed an early coffee only breakfast, because we only had two downhill miles to the van, where we would throw our shit into the cargo hold, and drive straight to the first diner we saw in Joseph and get ourselves a proper breakfast. That morning, as I lay, warm and comfortable in my sleeping bag, having repeated my usual bathroom before going to bed, getting up three fuggin times at night to pee, and then holding it as long as possible till morning, when I heard Mike moving. By the time I thrust my head out, his bag was stuffed, his sleeping pad was deflated, and rolled, he was dressed, and was just getting out of the tent! So, all this time, it was simply a matter of motivation. Ha!

It was a pleasure to have Mike along on this trip. His conversation is sharp and pointed and is usually deeper than the usual fluff I bring to the table. I was glad that Mike had nary a single issue, and his worst fear, having to cross water without his boots, was cut to only 3 times in 8 days. Way smaller than he, and I thought. We even had the Mike that wanted a couple sips of Scotch after a long hard day on the trail. 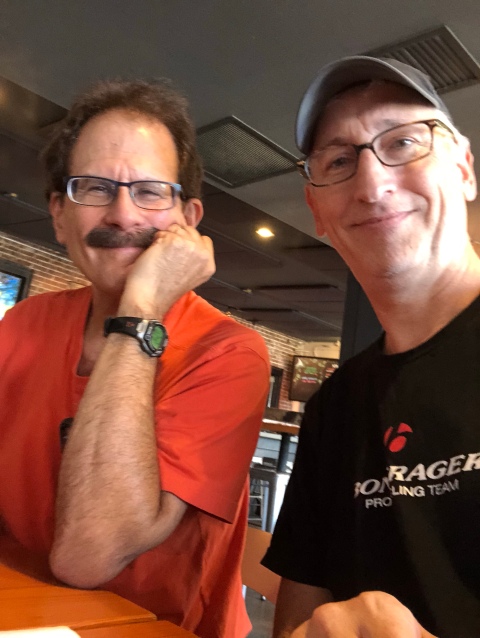 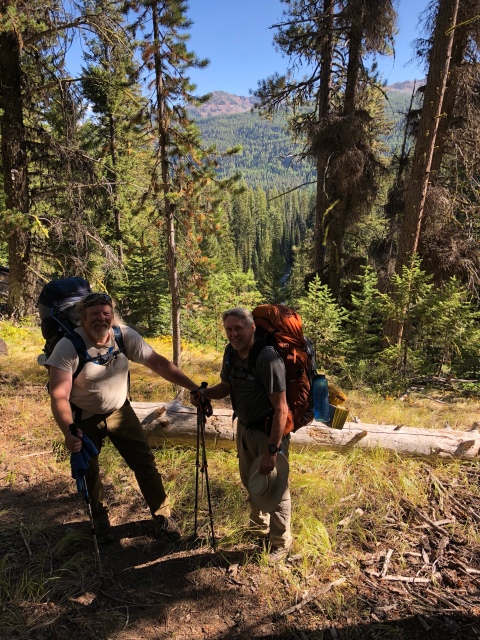 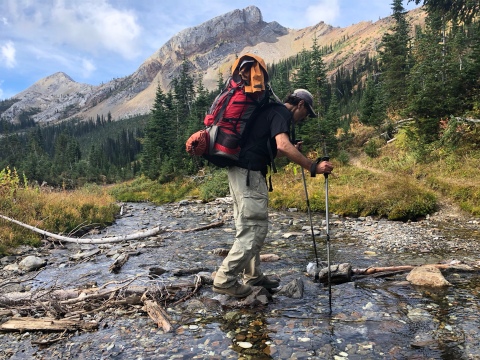 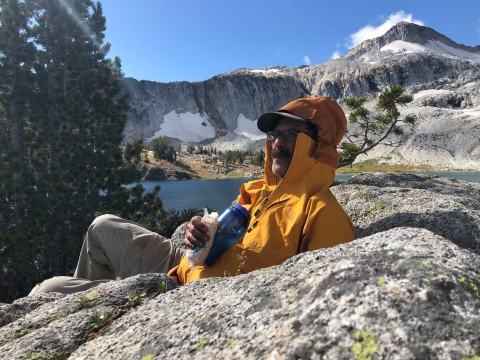 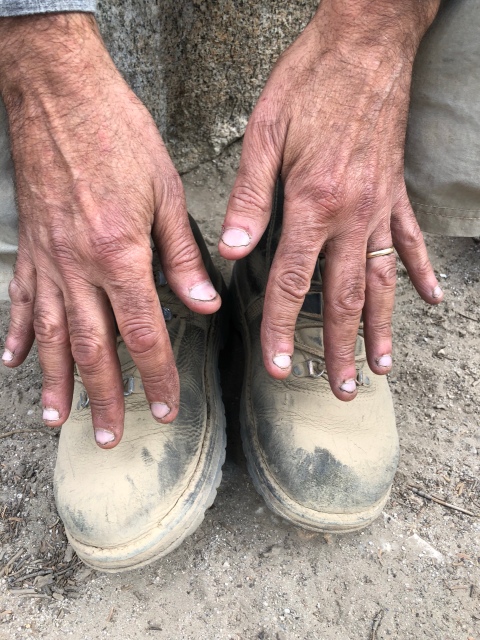 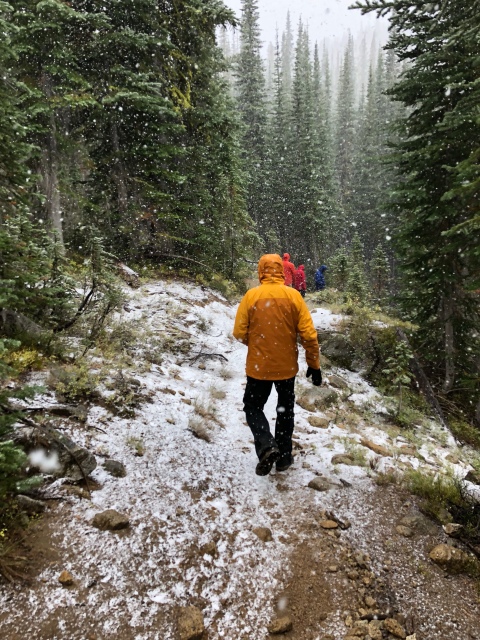 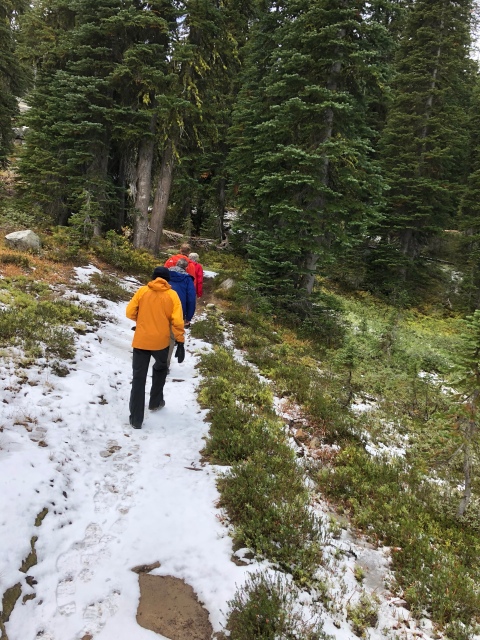 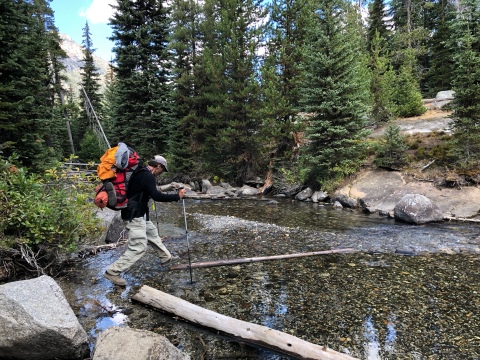 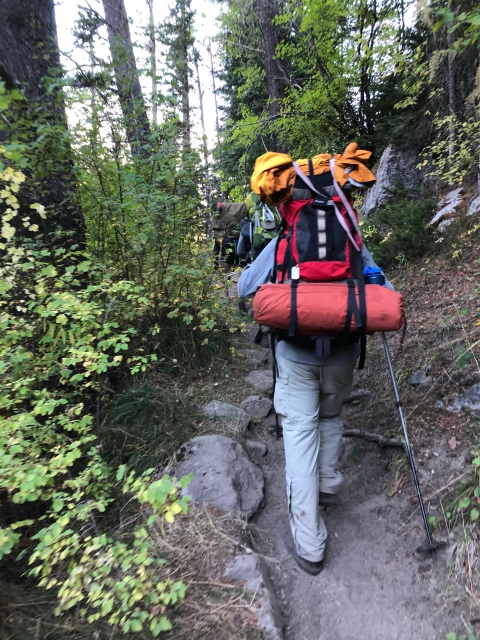