I have known Walt as Marty because my introduction to him was facilitated by my then roommate, who became my girlfriend, who became my wife, a.k.a. Susan who is sibling to Marty, and Marty is the family name for Walt. To me he is always Marty, but I have gotten used to referring to him as Walt in front of people who only know him as Walt.

So, in those days I had moved in with Susan into a single room efficiency apartment in State College where the only privacy was either in the bathroom, or anywhere other than the apartment. After a couple of weeks she asked if I wanted to meet her brother; He lived two apartment units South of us, and technically we could see his balcony from our non-balcony flat. Maybe it was Monday night football, or maybe it was Thursday night “Cheers” or maybe it was simply a night to meet Marty. I had heard about Marty for a couple of weeks, but hadn’t met him yet. We walked the two blocks, took the clearly-student-slums elevator to the Nth floor and rapped upon door and a younger version of the guy below answered and invited us in, and warmly invited me in. There I met the now famous Herb (Ed), Kenny P (Scott’s ex brother-in-law) and a few others whose names now escape me. In my mind, I remember Marty and I hitting it off right from the start, and we have known each other ever since. Only son in a three sibling family unit? We have that. Like Beer? We have that. Engineers? We have that. Penn State Football? We certainly had that. It was a good beginning.

Marty got a degree from Penn State in Aerospace Engineering and was hired by RCA Satellite in Hightstown, NJ where he settled into a rats nest of a place with my then also-Penn-State graduate and ex-roommate friend Charles Shultz. He and Chuck lived together in two rats nests before Marty married his sweetheart and moved into an old house in Englishtown NJ where he lived through two acquisitions before leaving NJ for Arizona and a job with a big tech company that I won’t name that was getting into the Satellite business.

Marty is a practical problem solver. That’s his job. He has been presented with problems all his life, both by friends, and by circumstance, and he comes up with solutions. One of my favorite stories was from RCA where the effort it takes to assemble any communications satellite is a HUGE investment of time and money, a particular project reached a point close to completion when there was a failure of some component inside the satellite. Of course there are backups and backup backups for some components, but usually you don’t want anything to fail until after it is in orbit, and if it fails before it goes up, then you fix/replace. Well taking apart a satellite and then putting it back together is time/money expensive, and Marty said, “If we cut a hole in the side right here, we can access the bad unit, and then we can simply replace the cutout, and tape over it with aluminum duct tape, and that’s what they did, and the satellite went up on schedule.

Marty is an opportunist, and bargain hunter. I guess he picked up the bargain hunting from Betty, his mother, because she is one of the best bargain hunters I know. You want something for the cheapest price, ask Betty. She is so committed, that after she buys something and sees it go on sale cheaper somewhere else, she will take the original back and go repurchase it elsewhere if the original store won’t match the price. Anyway, Marty saves money when he shops. Very practical. I could have learned much from this man.

Marty had his own band of brothers that he did adventuring with. As I heard them described, I imagined those excursions being something akin to a week long Mill Trip except with a lot of canoeing during the day, but canoeing should not be mistaken for not drinking. They sounded over the edge to me, and I never asked to go along, though I was curious. I had my own crew that I did two weekends a year with, and then there was The Mill Trip weekend in January, however a few years back Marty invited me along on his first planned backpacking trip into the Grand Canyon. I was interested, but it wasn’t a good time for whatever reason (See Jim Kirby posting where Jim says “When an opportunity presents itself…) and I declined. A year later he went again, and I declined again. Two years later than that, he said he was going into the GC for the last time, and if I didn’t go this time, he would stop inviting me, so I committed and joined him along with Herb (Ed), Scott Hellier, Dan Heller, and Sophia Nekoranik for a 4 day 3 night excursion that changed my perspective on backpacking trips.

Until that trip I was pretty happy with weekend warrior trips, though I had always pushed that crew to extend an extra day. I just wanted something a little longer, and in Friday, and all day Saturday, and out Sunday was just a lot of effort for so short a trip. Mike Barris and I had talked about bigger trips, but planning and organizing one just never happened, until I did this trip with Marty. As soon as I climbed out of that hole, I called Larry T Butler, and as he remembers I was very colorful in my plan descriptions for returning to the Canyon with my friends in tow.

Anyway, this was my fourth backpacking trip with Marty, and this one counts even though he had to bug out early. His number one son, my nephew, had a horrific motorcycle accident earlier this year, and Marty’s days are organized around phone calls dealing with insurance, and long term care and rehabilitation. He just couldn’t be away from a phone and a desk for as long as I was going to take him away, but he wanted to be with us, and he gave me a few days of his company, and we all had fun hanging out with Walt. 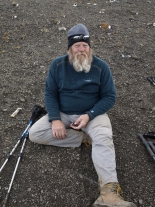 Marty’s last day with us.

At the junction to Deception Pass