The Hell of Hunterdon is a tribute ride to what is arguably the best of the European one day “Cycling Monument” races, Paris Roubaix, a.k.a. L’Enfer du Nord, The Hell of the North. For those that are ignorant of this cycling classic, Paris Roubaix is jaunt through the old WW1 war grounds of France between Paris and Roubaix. The route stitches together 29 “sectors” of cobbles for a total about 55 km, and count down as they are encountered, so the first sector, Troisvilles to Inchy, is hit at kilometer 97, and is numbered 29. There are sections that are ancient even to an American audience, for example, Trouée d’Arenberg, a Roman era road that is off limits to all forms of travel but foot traffic year round, except for this race. A 2.4 Kilometer line of carnage for many, and the place where this race begins to break apart, and many find that this is not their year.

Like the race that it is meant to emulate, except for the actual racing part, The Hell of Hunterdon stitches together 17 sections of Hunterdon County public gravel roads. Unlike Paris Roubaix, this ride includes elevation. In that sense it is a hybrid between De Ronde Van Vlanderen (a.k.a. Tour of Flander) and Paris Roubaix. Many of the “cobbbled” sectors of PR, can only loosely be called cobbled roads, as they are more dirt roads with cobbles here and there. Here in Hunterdon, the gravel sections can be flat, they can climb, they can descend or they can be a little of all three.

Always staged at the end of March, the condition of the gravel sections can vary widely as it is usually run before the county road crews get out to deal with the winter damage. The main practice for handling these roads is to keep distance between you and the rider in front of you, and try like hell, to not arrive at a sector as part of a large group, as this limits your options. Keep in mind that unlike Paris Roubaix, the roads are open and though they are gravel and back country roads, they do still have traffic, so a high level of keen awareness is a necessity for this ride.

Kermesse Sport organizes this ride, as they do other rides that pay tribute to other cycling monument or semi-monument races. In addition to The Hell of Hunterdon, they also run Fools Classic, and Fleche Bufoon. The former is probably more a tribute to The Tour of Flanders, and Fleche recognizes La Fleche Waloon, (The Waloon Arrow) a classic race held in the Waloon (French not Flanders) part of Belgium. Belgians are mad for their cycling, and their races reflect that madness, and these rides recognize and celebrate the madness.

All of these rides I have heard about, and usually I hear about them the week after they occur, and then I think “maybe next year”. This year I had January 27th, 7PM set as a reminder, because that is when the BikeReg.com pages for each event opened up. I was ready to commit for a few events. The important one is The Hell ride. That is the one that fills up first, and fortunately I got in without a hitch.

As event day rolled closer, I knew that a cycling friend of mine, Tom Fahey was signed up, as was Tim Hall, who I also used to ride with when he lived in the area. Tim moved out to Pennsylvania, just across the Delaware from where this ride is staged, so Tim has become very familiar with this area as a cycling heaven. Just to be clear, cycling haven could also have been used in the last sentence.

In any case, I was expecting to meet another friend, John Lewer there, and loosely I expected that we would all ride together. What I found out when I got there was that not only had Tom registered, but he got the rest of the “Hance and River” crew to register, so Mike, Howard and Tony were there as well, and by some remote chance, we all ended up parking within two cars of each other at Montgomery High School, the “official” parking lot for The Hell of Hunterdon.

Not to be left out of this chance encounter, Joe Tilman and his lovely lady friend Gina were also parked nearby. All of us together was probably too much to handle, with the abilities, and fitness level of everyone quite different. Joe is as strong as an ox, as is also John Lewer, and John had a couple of other friends there who were also pretty strong. Though we all started in the same wave of riders, we all settled into our comfort zone groups, and I completed the ride with Tom, Tim (also an ox), Howard, Tony (Ox), and Mike. The next time I saw John was when I was approaching the finish, and he was in his car heading to PA!

The details of the ride I will leave out of this post, other than to say a couple of things.

The ride starts and ends at the Princeton Elks Lodge, where the beer starts to flow after 1PM. The folks at Bucks County Brewing, as well as those at Rubber Soul have kegs on tap for those riders who have finished. Also included in the registration fee is a post ride meal of Belgian Potatoes, Pasta, Veggies, and a meat (Chicken today). Load up quickly because recovery depends on getting that food into your body as quickly as possible. I would have stayed longer, but I had a birthday (mine!) dinner to attend at Pete and Elda’s in Neptune City with my wife and daughter #2, though in reality others were recruited to make this a truly special night. Thanks Mike, Bonnie, and Elise for coming out!

Lastly, I was able to hook up with an old riding friend from my AT&T Red Hill days in the 90’s when I ran lunch time rides for a few years. Mike Cruz had gotten started cycling, and joined me on those rides, and through Strava, I re-connected with Mike. This is the same story that occurs millions of times because of Social Networking, and we were able to meet up on this ride, and by chance, actually ride together again. After pulling around him and setting a pace I heard him say “This is a very familiar view!” 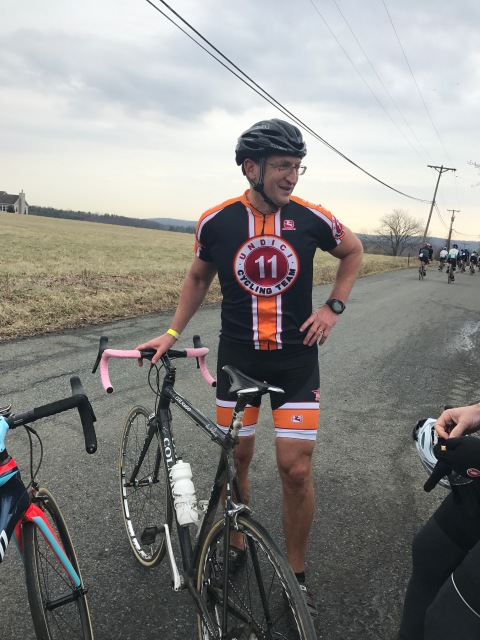 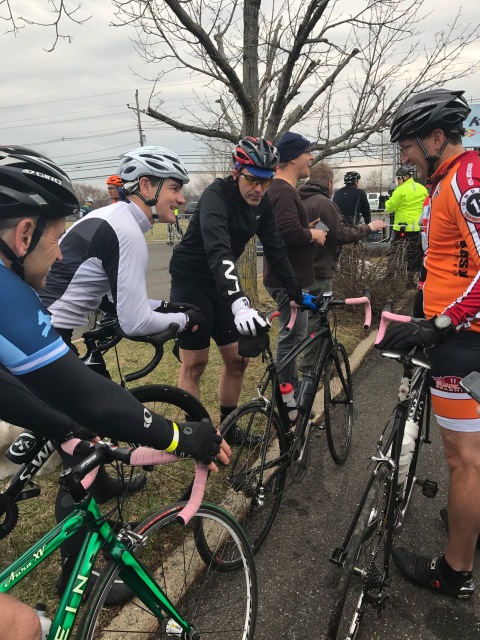 You are currently reading L’Enfer D’Hunterdon at Big Bird's Adventures.