My first winter backpacking trip was a weekend on the AT out of High Point New Jersey during my first trimester break from college in 1977. I was a freshman at Penn State, and while I was home for the Christmas holidays, my buddy Chris suggested we do a weekend on the AT. I can’t say that everything went great on that trip, but I learned that you can backpack in the Winter, and it brings a different set of circumstances to bear each and every time.

Some time in the late 1980’s, after I had started attending “Mill Weekend Winter Camping” trips, I joined my friend Larry, Chris and some of their Virginia friends for a late Winter 3 day weekend warrior trip in the Mountains of Northern Virginia. My gear was better, there were more of us, and this crew built fires while at camp. Fire changes everything!

It was February 2005 and we had slated the last weekend of the month for our annual late Winter/early Spring weekend in the woods and we decided to return to the mountains outside of Blacksburg, Va, home of the Virginia Tech Hokies. Up in those mountains was the shooting site of Dirty Dancing at a place called Mountain Lake Lodge surrounded by the Mountain Lake Wilderness. The Appalachian Trail runs through the heart of the wilderness, and when we had last visited this area we hiked South along the AT from its junction with Laurel Springs Road. This time we would hike North from the intersection with Mountain Lake Road (613).

Greg is a Hokie, and may have been the primary motivator for returning to this area, but I was happy to be returning to the woods again. I was working at Lucent in those days, and those days weren’t good days to be an Employee. I was a contractor, and so, simply had contractor fears, but those were easier fears to manage than lose your job employee fears. It was time for a little break, and so after work on Thursday evening we would drive to Larry’s house, and then we would be passengers for the rest of the journey. A total drive of 8 hours from Jersey, if I could keep the driving component to just the DC area to Jersey, then Blacksburg is the limit of my reach. My friend Mike joined me for this adventure, so at least I would have company for those Northern miles.

Here is what I remember about this Winter adventure. Mike and I hit the road some time late afternoon, maybe early evening. It wasn’t snowing when we left, but there was snow in the forecast, and the further we got into the drive the denser the storm got. I was 5 years into my 4×4 Toyota Tundra, so with the four wheel drive engaged we limped along 95 through Delaware and Maryland until we found ourselves on the Outer Beltway. Traffic was light, because of the weather, and though snow had collected on the roadway, we were making decent time. The closer we got the more snow there was. We were in touch with Larry and he was tracking our status.

From the Beltway we jumped on the Dulles Toll Road, and from there we paid our toll and exited onto the Fairfax County Parkway. At this point it was only a matter of time, but the more local the streets got, the less clear they were. We pulled into Larry and Melanie’s place late, with adrenaline pumping. Hours of driving through snow does that. Larry got us settled in quickly and came up with some trunks and suggested we take some time in the hot tub. It was still snowing, I was still pretty worked up, and other than drink a couple beers, what else to do?

The subject was about the hike the next day. Word was that the storm was waning, and the brunt of it hit the Northern part of the state. Once through, the temperature would drop and maybe there would be fog. By morning the roads should be clear, and the further south we drove the less snow we should hit. We didn’t want a “no snow” situation, because snow is always a nice addition to Winter Backpacking, but we did have a 4 hour drive ahead. For this trip our participants would be Larry, Greg, Larry’s brother in law Mike 1, Ed, myself, and my friend Mike 2.

As predicted, our driving conditions improved as our mileage increased. It was windy most of the night, and though the storm had passed there was still moisture in the air in the form of fog and mist, but as the hours and miles piled on a nice clear day was taking shape above us. We stopped in Blacksburg for quick bite and then we headed West towards our destination.

Those of you that have seen the movie “Dirty Dancing” with Patrick Swayze, Jennifer Grey, and Jerry Orbach know that the movie took place in Catskill Mountains, however the set utilized the Mountain Lake Lodge in Virginia, and most of the Mountain shots were actually North Carolina. When you see the lake and lodge, you know you are on the movie set, and we had a long windy climb past the set on route to the trail head.

At some point in the climb we reached an elevation where the temperature during the night had been cold enough that the wind blown mist and moisture crystallized on the lee side of every single branch above that freezing point. The effect was so unbelievably awesome, it is difficult to describe. Locally such beauty is seen just after a fresh snow and every bough is loaded with fresh snow that hasn’t begin to melt away. A winter wonderland you would call it. This was the same magical effect, but all the ice was sticking straight out from every branch as you can see in the pictures below. I have more pictures somewhere from this trip, but these were the ones I had digitized when the film was processed. I think I took both my wife’s small Olympus point and shoot with color, and a small Rollei 35 in which I shot a roll of black and white. When I find the B&W, I’ll update.

We hiked in about 2 or 3 miles along the AT, and then when AT turned due East we continued on to find a nice place to camp that had some water sources. There was some snow to melt, but also plenty of high marsh to break through the thin ice and get water. Plenty of downed wood provided for a warm fire, and since we weren’t in for more than 3 days, we packed in some beers and a few healthy spirits. The entire weekend was a success, and by the time it was over all the Hoar Frost had melted off the trees and they reverted back to their dead as nails winter look.

You only see this a few times in your life

It was something I said

I didn’t bring a tent this time, and just slept out on the snow.

We day hiked to this ledge 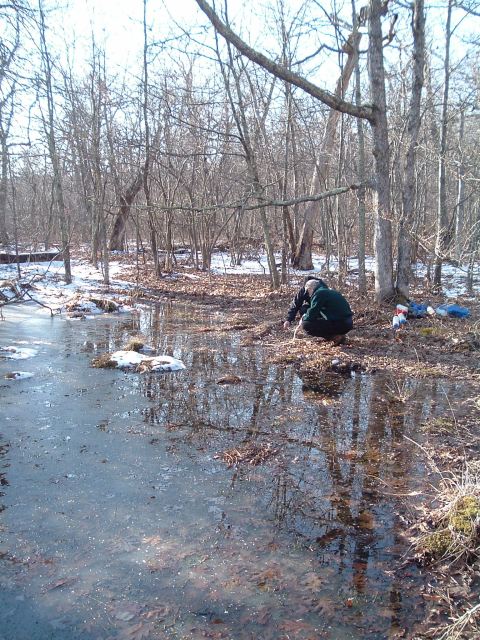 When you camp high, sources of water are few.

Update!! I found some low resolution version of my black & white pictures from this trip and they follow here. 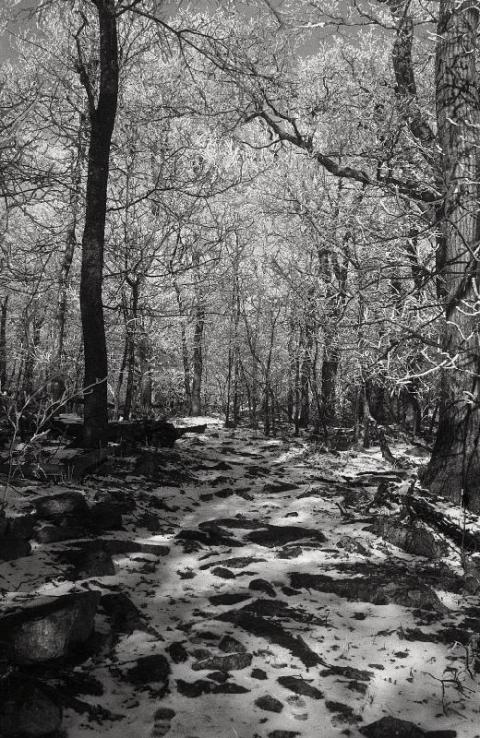 Everywhere you look was beauty

No end to the awe.

Stopping for a break

On an outcropping early in the hike.

Looking West, you can see the frost is high. We are high.

Running out of words.

One of my favorite photos 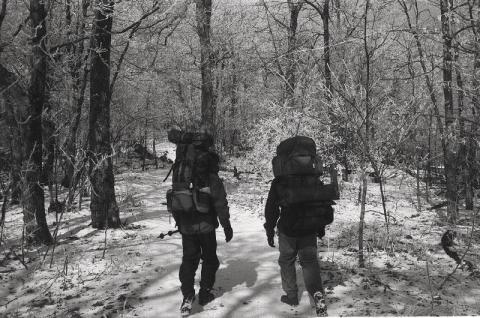 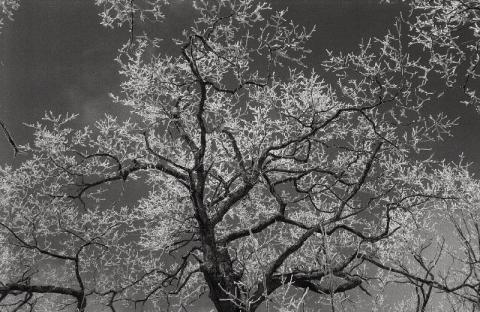