I am not sure of the date, but it must have been while I was still an under grad at Penn State. The trimester was coming to an end, finals were almost over, and my friend Chris was already spending the summer in Northern Virginia at Larry‘s house. We talked on the phone about me coming to visit before I went home myself, and how I would get there when Chris mentioned that Melanie, Larry’s girlfriend at the time had a brother at Penn State, Mike Smith, who had a care, and I could hitch a ride with Mike. I remember calling Mike that evening, and a low low low voice answered the phone and we went on to make plans to travel. Mike was an engineering major, Nuclear I believe which could only mean one thing. Two socially awkward human beings would be in that car going home.

Fast forward a few years, and the next time I met Mike it was a couple of years after I had started attending the Mill Trips, and Mike started coming down as well. I am not sure where he was working at the time, but as a Penn State engineering graduate, he came out of school with a job in hand. Larry and Melanie were married by this time, and Mike was involved in social growth. We all eventually grow out of our awkwardness, and the same was true of Mike. He was listening to a lot of good music, and was branching out. Had some roommates, and I think he was even commuting to work on his bike. He also started coming out with us for Winter Backpacking trips. Growth in all good directions! I am not sure who the author of the “Budweiser” song at The Mill is, but Mike gave the song new life with his ultra-bass rendition. That man’s vocal chord can flutter, recognizably, at very slow frequencies.

Someone Larry and Melanie knew, had a young woman living in their attached, or basement apartment, and matchmakers they were, they thought Mike and Madonna would be a good match. Apparently they were, as they have now been married some 25 years or so, and 3 kids, until this year when they adopted a fourth. More on that later. Madonna worked for the State Department (currently under Trump attack), and ended up getting assigned to the US Embassy in Bulgaria, where the two of them flew off to. I am not sure what Mike did during those years. He went with Madonna, but the idea of working from home, and working abroad wouldn’t come to US companies for a few more years. Perhaps he took a leave of absence from his job, or simply resigned until he returned to the states. I doubt there was much opportunity for him in Bulgaria, but at least he figured out quickly “Pivo” was either a Bulgarian Beer, or the Bulgarian word for beer. It would later become the name of their dog once they returned to the US.

Enough about history. Mike was the reason we were in Oregon. When he lived on the East Coast, we structured our weekend backpacking trips so that we could meet somewhere halfway between Larry in Northern Virginia and Mike in South Carolina. That usually fell in the Blacksburg area, and we backpacked behind Virginia Tech a couple of times, the most famous being Mountain Lake Wilderness – 2005 where we arrived after a freezing moist wind filled the mountain tops with inch long hoar frost. We also met once outside of “Boona Vista” for an AT hike, which is where Mike became a trend setter. That trend was the trend of changing what we sat on while in camp. This is really a trick question, because we didn’t have anything to sit on in camp except whatever logs or rocks we could find around the campfire. Sitting on rocks and logs sucks, and Mike was the first one to branch out into the new technology that allowed you to utilize your thermarest pad as a chair. The pad folds on itself and provides insulation from the cold ground (+1), and back support (+1). The only issue, though not at the time was getting up required an effort, but no different than getting up off the floor, and we have done that a lot over the course of our lives. Trendsetter.

So we were coming to Oregon, and Scotty suggested “The Wallowas”, and I researched, and it was The Eagle Cap Wilderness in the Wallowa Mountains. The time-frame was set, the place was set, we just had to get Mike on board, which he was pretty much all the way up until he wasn’t. We even got Mike to invest in new boots, so he was ready, however the opportunity to do good in this world arose, and Madonna and Mike jumped at that opportunity. As parents of three children with clotting disorders, they became involved in that community. How could you not? Through this community they became aware of children abroad with the same disorder, and in particular, a young boy living in an orphanage in China, and they set about on the long process of bringing Gavin to the US as their adopted fourth child. That effort played out earlier this year, and Mike pretty much used up all his spare non-work time and vacation, so there wasn’t anything left for a ten day commitment. The best we could do was to get a two day commitment from him to drive out with us for our car-camping part, and choose a first night in the wilderness that would offer Mike a downhill retreat before the 6 hour drive home. And that is what we got out of Mike. We got his company late Thursday evening, and we hung out and hiked with him through early Sunday morning when we said our fair thee wells. We did get some bonus time on the tail end of our trip when he met us in Portland after we drove back and got all cleaned up. I forget the name of the pub, but Mike found us there after he dropped off some kids in Hood River.

Mike, this is notice that we are hiking again in 2020, probably the same time of year, so put it on your damn calendar, and plan on being there. It won’t be in Oregon, so it won’t be so easy, but you need to come out with us again and spend more time. Until then, Cheers! 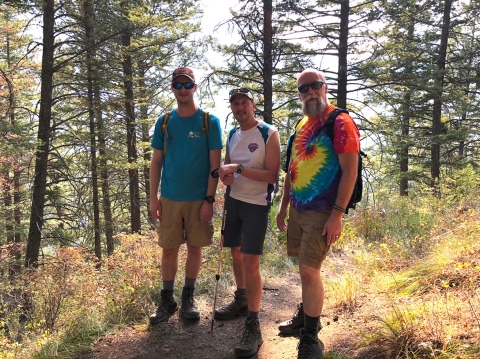 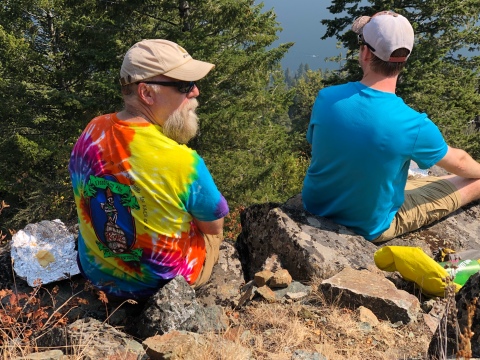 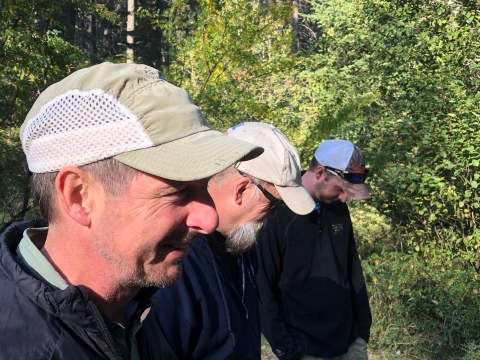